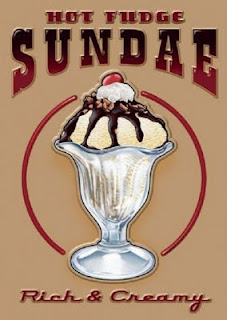 There are lots of theories about the origins of the Hot Fudge Sundae. According to Wikipedia, a frequent theme is that the dish arose in contravention to so-called blue laws against Sunday consumption of either ice cream or ice cream soda (the latter invented by Robert M. Green in Philadelphia, Pennsylvania, in 1874). The religious laws are said to have led druggists to produce a substitute for these popular treats for consumption on Sunday. According to this theory of the name's origin, the spelling was changed to sundae to avoid offending religious conventions. Since I grew up in Philadelphia, I remember the Blue Laws, although at that time they pertained to alcohol and not ice cream.

There are lots of fabulous Fudge Sauces out there from great chocolatiers, but if you want to make your own, here's a delicious recipe for Hot Fudge Sauce! As in most recipes, it's the quality of the ingredients that makes all the difference!

Directions
Bring cream, corn syrup, sugar, cocoa, salt, and half of chocolate to boil in saucepan over moderate heat, stirring, until chocolate is melted.
Reduce heat and cook at low boil, stirring occasionally, 5 minutes, then remove from heat.
Add butter, vanilla, and remaining chocolate and stir until smooth.
Cool sauce to warm before serving.

Hot Fudge Sundae Cake is a great variation on this traditional treat, and it can be made in a pan in the oven or in a Slow Cooker. See recipe HERE.

Check out the recipe adapted from Betty Crocker for Hot Fudge Sundae Cake in a pan. It's an easy one bowl/pan recipe. What's especially delicious about this cake is that as the cake bakes it separates into a chocolate cake and a dark fudgy sauce. Now that's what Hot Fudge Sundaes are all about! Add the ice cream and you're all set.

Posted by Janet Rudolph at 8:21 AM