Love this Retro Ad & Recipe for Congo Squares aka Blondies or Blond Brownies. As always, you can never have too many recipes! Congo Squares or Bars, by the way, have nothing to do with Africa. There's nothing like it in any African country that I know of...and you can't even grow wheat in Central Africa. So why are they called Congo Squares? Who knows.. maybe because of the exotic ingredients (chocolate, cocoanut, nuts) which might come from Africa? I also read somewhere that these originated in the Southeast (US). There was a plaza in New Orleans called Congo Square which in the early 19th century was a gathering place for both free and enslaved African-Americans who met for marketing, music-making and dancing... probably not the connection, but a possibility. Whatever the origin, this is a great treat for the weekend!  This Nestle ad is from 1949 and doesn't include the cocoanut, but throw some toasted cocoanut in. 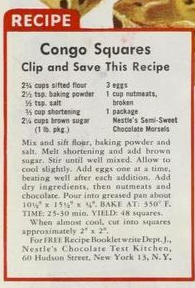 Posted by Janet Rudolph at 1:02 PM