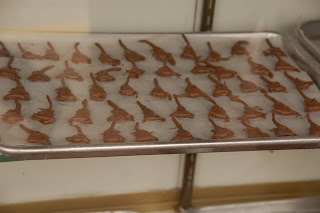 October 14 is National Chocolate Covered Insect Day. Not my cup of cocoa, but since this is a holiday, I did a little research.

Educational Innovations (a source for teachers) offers Chocolate Covered Insects that are completely edible and farm raised. Yeah, that's what I needed to know-- that the insects were farm-raised. They come in single (Bug-350) or Box of 24 packages (Bug-350BX). Each package comes with 4: 2 crickets and 2 larva. Ugh. Description says 'tastes like chocolate covered popcorn.' I'll pass, but if you're feeling adventurous, try them and let me know. From the illustration, it looks like the insects (and larvae) are covered with white and dark chocolate.

The CandyWarehouse offers packages of Chocolate Covered Insects that seem similar. One thing that any chocolate lover wants to know is the quality of the chocolate. No description except milk chocolate and white chocolate. This website is quite flip. Although the description refers to roaches, I don't think there are any in the pack. But who knows? I found "Chocolate Covered Ants Candy" in the "You Might Also Like" box. I don't think so. I do think the CandyWarehouse needs a new copy writer. I'm not volunteering, but would you want "Gross' in your product copy? Perhaps the owners don't care or are being funny. Or maybe this whole chocolate covered bug thing is reaching for a completely different sense of aesthetics.

CandyFavorites offers Edible Insects in many different chocolate varieties. I have no fault with their copy, "We are often asked if the edible insects are real and the answer is “yes.” As featured on television reality shows, edible insects are ideal for any occasion in which you want to offer a truly unique treat!" Now, I'm a baker, and I love to entertain, but I just don't know what that special occasion might be. However, for those who are interested, they also have Chocolate Covered Crickets in addition to the standard Chocolate Covered Ants.

My husband Frank was in the Peace Corps in Cote d'Ivoire where much of cacoa is grown, and even though he often had roasted crickets as treats, he never had chocolate covered ones there. There were plenty of cacoa trees where he lived, but no finished product.

While searching for Chocolate Covered Insects, I found a very interesting recipe for Chocolate Scorpions on the BBC Homepage. Leave it to the Brits! This was listed under Onsite Catering/
Recipes. Don't think that will go down well with a film crew.

You will need:
12 dead scorpions
a big bar of chocolate (good quality, fair-trade)
a big pan of boiling water
a big heatproof bowl

Put the chocolate in the bowl, and gently rest it in the pan of boiling water. Once the chocolate has melted, carefully remove it from the water, taking extra care not to burn your fingers. Dip the scorpions in the chocolate, and allow to dry. Now eat. Yummy! (PS: Scorpion stings are not lethal once they’re dead.) Of course, you may not be able to make this if you don't happen to have a few scorpions around or if you're a purist and need to know that the ones you might have are farm-raised. They're probably not.

Searching some more, I found a wonderful photo of a tray of chocolate scorpions (see above) on A Yankee-in-Belgrade. Bibi, the Yankee in Belgrade, told me she saw these in the window of a candy store in Pismo Beach (CA) when she was back in the States. My good friend Pierre was in Pismo last week. Should have asked him to pick me up some. On the other hand, maybe it was just as well I didn't ask.

Addendum: Perhaps I was too glib about insects. Have a look at SmallStock dedicated to a steady supply of foods derived from farmed insects.

Photo: A Yankee-in-Belgrade
Posted by Janet Rudolph at 7:14 AM

Dear Janet -- WONDERFUL blog! Thanks for telling your readers about our chocolate-covered insects. They really are pretty palatable, we promise. (But if your husband wants plain old edible crickets, we can hook him up!)

Looks like you were referencing an old catalog. We’re hoping that correcting a few points won’t be a problem? We sell a package of 6 insects (3 crickets, 3 larva) in assorted white and dark chocolate (BUG-355). The product number for our box of 24 packages (a whopping 144 insects total!) is BUG-355BX.

Lastly, can you please correct the link to our product page? This will work: http://www.teachersource.com/product/chocolate-covered-bugs/insectsnacks&r=twitter

Again, we’re delighted to be part of your Dying for Chocolate blog. If you ever decide you’re ready to sample some farm-raised insects, you know where to find us.

PS: How did we miss the fact that October 14th is Chocolate Covered Insect Day? Some heads might roll around here...

Thanks so much for update. I've changed the link. Not quite ready to take the plunge!

Thanks for the link fix.

BTW, We've now discovered ANOTHER important holiday we missed -- I Love Lucy day (10/15)! There's the episode in the candy factory where they're eating fudge. Blog fodder for you, perhaps?