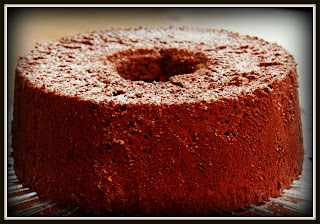 Today is National Angel Food Cake Day. Just in case you were worried that there would be no chocolate, here's my go-to recipe for Chocolate Angel Food Cake. Recipe from Martha Stewart! This cake is light and airy and delicious... truly angelic!

Angel food cake is a cake made with a lot of egg whites and usually no shortening or leavening agent. It's like a sponge cake. From WhatsCookingAmerica.net comes this piece of information: Angel Food Cake is also known as ice cream cake (a Pennsylvania Dutch wedding cake). And, because there are an abundance of cake molds in southeastern PA, one of the major producer of cake molds, angel food cake may have originated there in the 1800s. Some other historians think that the first angel food cakes were baked by African slaves in the South because making this cake required a strong beating arm and lots of labor to whip the air into the whites (pre egg-beaters 1865). Angel Food cakes are also a traditional African-American favorite at funerals.  You decide, but whatever the origin, you'll love this cake!

Easy Egg Separating Tip: Because there are so many eggs to separate in this recipe, I use the 'egg trick.' Break all eggs into bowl (yes yolks and whites). Then take an empty water bottle and place the neck near a yolk and squeeze the water bottle. The yolk pops up into the bottle. Then place the water bottle over another bowl and release. So cool! Try with one egg first, just to master this simple task!

***
And, in case you's rather have DEVIL'S FOOD CAKE, here's a post with recipes!
Posted by Janet Rudolph at 9:33 AM

I'm guessing the origin of angel food cake is Pennsylvania Dutch (probably brought from Germany), because of the overabundance of long-beaten eggs in so many of their great dessert recipes.