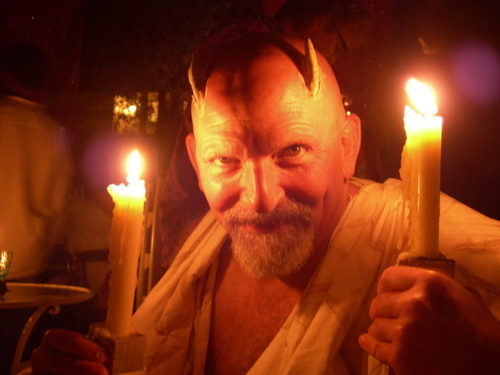 I love when my mystery and chocolate worlds collide. Recently I was on a social media panel at a crime fiction conference, and although my "topic" was Facebook, I mentioned blogging and twitter. One of my twitter buddies (and Facebook friends) Craig Faustus Buck was in the first row, so when I mentioned that I'm always looking for recipes for Dying for Chocolate, he stepped up to the plate! Great cross-promotion on both DyingforChocolate.com and MysteryFanfare.com, not to mention Facebook and Twitter! Plenty of other platforms, too. O.K., social media aside, this is a great chocolate "noir' recipe!

Craig Faustus Buck has written six nonfiction books, two were #1 NYT bestsellers--one pop-psychology the other pop-gynecology.  His short film, Overnight Sensation, was nominated for an Academy Award.  He was one of the writers on the seminal miniseries V: The Final Battle and wrote the famous episode where The Incredible Hulk dropped acid.  His agent is currently shopping his first noir mystery novel, Go Down Hard,  First Runner Up for the Claymore Award at Killer Nashville.  His novella, Psycho Logic, is due out this month from Stark Raving Group. And his indie feature film, Smuggling for Gandhi, is currently in preproduction.

I cook as I write: noir. This sauce is dark and complex and morally ambivalent, by which I mean I once made a brisket this way for a Passover seder and it was so good no one complained about the pork. The chocolate disappears in this dish and becomes an amazing undercurrent of flavor.  It's nothing like the earthy flavor of Mexican mole Poblano. I think this dish appeals to a much broader palate. Even kids love it.

This is also a very forgiving dish. The first time I made it, I put chocolate/cocoa/rosemary in with broth instead of at the end. It worked out just fine. I added a little more chocolate/cocoa/rosemary at the end, but I don't think it made much difference.  ou can also use this sauce with any cut of beef that can be braised, though you may have to adjust cooking times, depending.  I'd wager this would also be fantastic with lamb or pork shanks, but I haven't tried that yet. For brisket, see my note below.

4. Add wine and boil down until liquid is reduced by half, scraping up brown bits.

6. Remove ribs. It's best to refrigerate ribs and liquid overnight to skim off all the fat, but if you're in a hurry simply allow to cool and skim.

Uncover and simmer until meat is tender, about another 1 1/2 hours.

Brisket note: If you use brisket, you definitely want to cool overnight in the fridge (step 6).  The next day, skim the hardened fat off the top of the liquid, slice the cold brisket, and put it all together in an ovenproof serving dish, being sure to sauce between the slices.  Heat for 20 minutes at 350 and go to heaven.

Yield: about 8 servings
Posted by Janet Rudolph at 10:49 AM

Hi Janet!
Savory chocolate recipes that are really tasty are hard to come by. Looks like a winner here:) Please thank Craig for sharing...And thank you to you too:)

Short ribs AND chocolate? I am SO there. Thanks

Sounds delicious-even better if Craig would come here to make it for me.