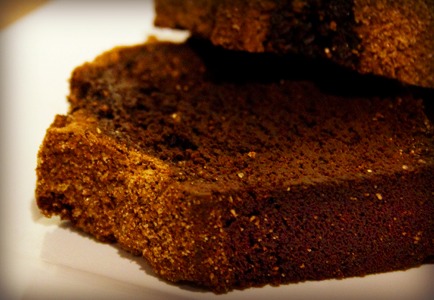 But back to Chocolate and Cinnamon. If you frequent Starbucks, you may remember the chocolate cinnamon bread, a seasonal baked good. Not sure why it's seasonal, but I haven't seen it in awhile. So I went searching for the recipe. Lo and behold, I found the recipe on the Starbucks website. Yay! So you can make your own. Warning, this really isn't a quick bread. It's more like a cake, but that's o.k. with me. I've adapted the recipe a little. And, remember, always use the best cocoa and cinnamon! Question about Dutch processed cocoa? Go HERE.

Chocolate Batter:
1. Cream together butter and sugar in electric mixer until light and creamy, around 5 minutes. Add eggs, one at a time, mixing until each is fully incorporated. Scrape down sides of bowl a few times to get them fully mixed in.
2. In a medium bowl, sift together flour, cocoa, cinnamon, salt, baking powder and baking soda. In separate bowl, whisk together buttermilk, water and vanilla. With mixer on low speed, begin adding contents of each bowl to butter mixture, alternating between the two until mixture is fully blended, but not overly whipped. Split batter between the two pans. If batter is slightly uneven, you can lightly shake the pan to even out the tops.

Bake for 45-50 minutes, or until a toothpick inserted in center comes out clean.