Sometimes You Feel Like a Nut... Homemade Almond Joy! 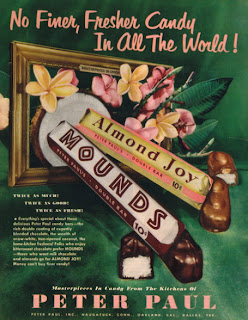 Today is National Almond Day.  For me, Almonds and Chocolate are all about Almond Joy.

Today, Almond Joy candy bars are manufactured by Hershey's. Almond Joy has a coconut-based center topped with two toasted almonds and covered in a layer of milk chocolate. Almond Joy is the sister product of Mounds, which is the same confection but without the almond and coated with dark chocolate. I'm actually partial to Mounds, but for the purposes of today's holiday, I'm posting about Chocolate Covered Almonds and Almond Joy. One concession, in the recipe for Homemade Almond Joy Bars, I use dark chocolate! "Real"Almond Joy bars have milk chocolate. Your choice.


According to Wikipedia, Peter Paul Halajian, a candy retailer in Connecticut in the 1919, along with other Armenian investors, including Dutch candy manufacturer Jett Schaefer, formed the Schaefer Candy Manufacturing Company in 1919. The company first sold various brands of candies, but following sugar and coconut shortages in World War II, they dropped most brands and concentrated their efforts on the Mounds bar. The Almond Joy Bar was introduced in 1946 as a replacement for the Dream Bar (created in 1936) that contained diced almonds with the coconut. In 1978, Peter Paul merged with the Cadbury company. Hershey’s then purchased the United States portion of the combined company in 1988.

During the 1970s, the Peter Paul company used the jingle, "Sometimes you feel like a nut / Sometimes you don't / Almond Joy's got nuts / Mounds don't," to advertise Almond Joy and Mounds together. In a play on words, the "feel like a nut" portion of the jingle was typically played over a clip of someone acting like a "nut", engaged in some funny-looking activity. See the Retro Commercial Video below.

Directions
Preheat oven to 350F
1. Spread raw almonds on baking sheet and toast for about 10 minutes. Remove from oven and cool.
2. In big mixing bowl, blend milk, butter and vanilla. Add powdered sugar a little at a time. Add coconut a little at a time and mix until combined. The mixture will be thick. Place mixture in refrigerator for 30 minutes. (You can use your Kitchen Aid flat beater, but I prefer the texture that comes from hand mixing.)
3. Line baking sheet with parchment paper. Remove coconut mixture from refrigerator. With hands, shape one tablespoon of coconut into small log - 2 inches long and 3/4-inch thick. Press coconut mixture tightly together. Place logs on lined baking sheet and continue until all coconut mixture is finished.
4. Press an almond on top of each coconut log.
5. Place baking sheet in freezer to chill while you melt chocolate.
6. In medium microwave safe bowl, melt chocolate in tmicrowave 2-4 minutes at 30 SECOND intervals until chocolate is melted (or melt in top of double boiler or pan over saucepan of simmering water).
7. Remove coconut logs from freezer.
8. Dip in Chocolate: See next step

2. Using Two Fork method (or a special dipping tool - I find this tool handy for lots of other dipping, including truffles), dunk coconut logs in chocolate, bring up and tap on lip of bowl to remove excess chocolate. Place on parchment lined baking sheet and repeat.

Posted by Janet Rudolph at 7:46 AM

I've always been conflicted because I am a dark chocolate girl but also love the almonds. I think you just solved my problem!

I can't believe I missed Almond Day Janet. Oh my...I have been on such a Mounds kick lately because I too prefer the dark chocolate. I do believe you've solved my problem too, lol...I may just need to give this recipe a try while I'm on a blogging break (which I posted about just tonight:) Thank you so much for sharing, Janet