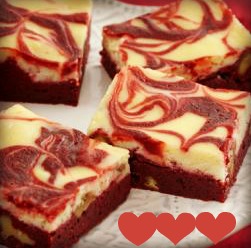 I should have posted this recipe for Red Velvet Cheesecake Brownies on Valentine's Day! Anything red and chocolate works for me! Who doesn't need another brownie recipe? This isn't my recipe, but it's an adaptation of Sunny Anderson's on the Foodnetwork, and it's delicious. The recipe contains red food coloring, but there are some nice Wilton natural red colorings you can use. it's an easy recipe--and oh so yummy! I use chopped chocolate rather than cocoa, but either will work in this recipe.