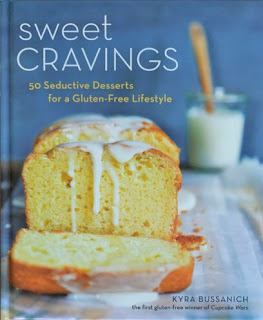 Have Your Cake and Feel Good, Too!

Kyra Bussanich is a two-time winner of The Food Network’s hit show, “Cupcake Wars.” She graduated with honors from Le Cordon Bleu and opened her award-winning bakery, Kyra's Bake Shop, which features gourmet, gluten-free sweets. She has branched beyond desserts to other gluten-free goods in order to help those with celiac and other autoimmune diseases enjoy quality treats.

“We assume it’s because we overate, but for a lot of people, that pain and sick feeling may not be about how much you ate but what you ate,” says Kyra Bussanich, (www.kyrasbakeshop.com), two-time winner of The Food Network’s “Cupcake Wars” and author of a just-released recipe book, “Sweet Cravings: 50 Seductive Desserts for a Gluten-Free Lifestyle” (Ten Speed Press; Random House, Inc.)

“About 2 million Americans have celiac disease – an auto-immune reaction to gluten, the protein in wheat,” says Bussanich, whose painful symptoms became life-threatening before she was finally diagnosed with the illness. “Most of those people aren’t diagnosed though, because the symptoms look like so many other intestinal ailments.”

People with celiac disease must completely avoid gluten, which is also in rye, and barley, to avoid a case of painful and gut-damaging indigestion. But, as Harvard Medical School reported earlier this year, avoiding gluten also appears to help people with less serious digestive issues.

“It really does seem to provide some improvement in gastrointestinal problems for a segment of the population," says Harvard assistant professor Dr. Daniel Leffler.

For Bussanich, a chef, there was no choice: One speck of gluten would make her ill. But she refused to give up pastries, cakes and other treats, so she perfected gluten-free varieties. Her award-winning desserts left their flour-based competition in crumbs on “Cupcakes Wars” in 2011 and 2012, and she was a runner-up on the show’s “Cupcake Champion.”

• If you’re following a recipe, don’t substitute the listed flour or starch with another type unless you’re familiar with its properties. There are many different types of gluten-free flours and starches, including millet, sorghum and sweet white rice flour, and potato and tapioca starches. Each has its own idiosyncrasies. For example, millet flour has a slightly nutty flavor and is well-suited for goods with a hearty texture. Sweet white rice flour holds moisture well and is good for recipes that have a slight gumminess to them. Potato starch is light and good for fluffy cakes.

• Use eggs and butter at room temperature. Eggs are often used as a binder, the protein that substitutes for the missing gluten. Eggs and butter are both easier to work with when used at room temperature, and room-temperature egg whites whip up fluffier. If you forget to pull the butter out of the refrigerator beforehand, heat it for 7 to 12 seconds in the microwave. Put cold eggs in warm (not hot) water for 30 to 60 seconds.

• Don’t overwork batter and dough with xanthan gum in it. Corn-based xanthan gum is often used as a stabilizer and thickener in gluten-free baked goods, sauces, dressings and soups. Once this ingredient is added, overworking the dough can give it a slimy, gummy texture, and cause it to lose flavor. (A good substitute for xanthan gum is ground psyllium seed husk.)

• Heat higher, cream longer for lighter cakes. One complaint people sometimes have about gluten-free baked goods is that they’re too dense. To prevent this, try setting the oven temperature 25 degrees warmer than you would for flour. This will cause the butter in the recipe to release its water as steam, which helps the cake rise quickly. Also, cream eggs and butter together longer – about 10 minutes – than you would for flour cakes.

“If your recipe doesn’t turn out wonderfully the first time, don’t give up,” she says. “I promise you, anyone can make delicious gluten-free desserts. It just may take a little practice.”

Pastry Cream:
To make the pastry cream, line baking pan with heatproof plastic wrap and set aside. Place milk and 1/4 cup sugar in saucepan and scald milk (heat to point where it is steaming and edges look like it's about to boil but not yet bubbling). Meanwhile, in large bowl, whisk together egg yolks, cornstarch, and remaining 1/4 cup of sugar until smooth. Once milk is scalded, whisk egg mixture vigorously while very slowly pouring in milk in steady stream. Then pour mixture back into saucepan and return to medium-high heat. Whisk constantly while heating to ensure that no lumps form. Bring to a boil and, whisking constantly, continue to let boil for 90 seconds. Remove from heat and stir in butter and vanilla bean paste until well blended.

Pour pastry cream into plastic wrap–lined pan and cover entire surface of cream with additional plastic wrap to prevent a skin from forming. Chill 30 to 60 minutes.

Pour milk and oil into small saucepan and bring to boil. Meanwhile, put tapioca starch in mixing bowl of stand mixer with paddle attachment. When milk mixture comes to boil, turn mixer on medium speed and slowly pour milk into tapioca. Turn to high and add eggs, one at a time, and blend thoroughly, stopping occasionally to scrape down sides of the bowl. Mix in vanilla and salt.

Evenly fill 36 muffin cups two-thirds full. Bake until puffed and golden brown and hard to the touch, about 25 minutes. Meanwhile, remove plastic wrap from pastry cream and place cream in bowl. Whisk to soften and smooth texture. Spoon cream into pastry bag fitted with #802 round piping tip. (Normally I advocate using a ziplock bag if you don’t have a pastry bag, but in this instance, the ziplock is likely to split along the seam.) Then refrigerate.

Once cool to touch, pop puffs out of pan. (If you can’t get  puffs to easily pop out, or if they begin deflating as they cool, put them back in oven for 5 to 10 minutes so they finish baking and crisp up.) Take pointed paring knife and carefully cut small round hole in bottom of each puff. To fill cream puffs, insert piping tip of bag of pastry cream partway into bottom of each puff and gently squeeze.

Chocolate Glaze:
To make chocolate glaze, melt chocolate over a double boiler or in microwave-safe bowl. If using microwave, heat in 30-second intervals, stirring between each. Stir butter and cream into melted chocolate until well blended.

Dip top of each cream puff in chocolate glaze, turn right side up, and place directly on serving platter.

As of Nov 9, Kyra Bussanich is now a THREE-time winner of the Food Network’s Cupcake Wars! And still the only gluten-free winner ever.

Her book, “Sweet Cravings”, has great, delicious, creative treats, many of them really easy to make (thank goodness for me).

And I found a fun, short video intro to her book at www.tinyurl.com/kyrasweet

As of Nov 9, Kyra Bussanich is now a THREE-time winner of the Food Network’s Cupcake Wars! And still the only gluten-free winner ever.

Her book, “Sweet Cravings”, has great, delicious, creative treats, many of them really easy to make (thank goodness for me).

And I found a fun, short video intro to her book at www.tinyurl.com/kyrasweet

Wow - Nice, Janet! As a French minor years ago, a fellow student make these, with a recipe in French and with non-US measurements! I had not heard of this cupcake winner, and love all the juicy details you provided about going gluten-free and the admonishment she gave of not giving up trying to get these recipes to work. Makes me want to buy the book!