Food of the Gods: Annamaria Alfieri 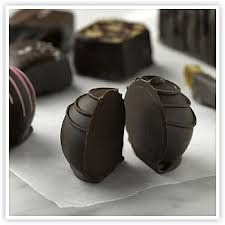 My chocolate and mystery worlds collide again! Today I welcome international mystery author Annamaria Alfieri. She is a big fan of chocolate. No surprise! This post originally appeared on the blog Murder in Everywhere, one of my favorite crime fiction sites! Reprinted with permission.

Annamaria Alfieri's latest novel is Blood Tango; set against the most dramatic period of Argentine history, it imagines the murder of an Evita Perón lookalike. It was chosen as one of ten must-read thrillers by The Christian Science Monitor. She has has also written Invisible Country and City of Silver. Writing as Patricia King, she is the author of the short story “Baggage Claim,” in the anthology Queens Noir. Her five books on business subjects include Never Work for a Jerk, which was featured on the Oprah Winfrey show. She blogs at Murder in Everywhere. A world traveler, Annamaria takes a keen interest in the history of the places she visits. She lives in New York City and is President of the New York Chapter of Mystery Writers of America.

ANNAMARIA ALFIERI:
FOOD OF THE GODS

My subject today is inspired by a comment on last Monday’s post by our reader—Kathy D. She and I share a love for “the sacred food.” For many years now, I have called chocolate my drug of choice. When asked to take sides in discussions of religion, I claim to worship IxCacao, the Mayan goddess of chocolate. With the holidays coming and the opportunities for chocolate consumption—not to say worship—increasing, it seems the right time to take up this subject. The beginnings of the human race’s relationship with chocolate are shrouded in prerecorded history. There is evidence that our love affair with it began in Mesoamerica as early as 1900 B.C. Mayan legend offers a prayer to the goddess: “O IxCacao, see my tears and come to my aid.” Now that I know it, I am going to repeat it in times of need. And then eat some of her favorite food as part of my rite. Why not? As we say in New York, it couldn’t hurt. 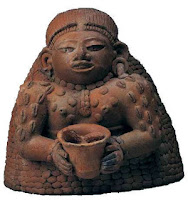 The beginnings of the human race’s relationship with chocolate are shrouded in prerecorded history. There is evidence that our love affair with it began in Mesoamerica as early as 1900 B.C. Mayan legend offers a prayer to the goddess: “O IxCacao, see my tears and come to my aid.” Now that I know it, I am going to repeat it in times of need. And then eat some of her favorite food as part of my rite. Why not? As we say in New York, it couldn’t hurt. 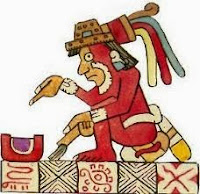 The ancients in Central America believed that chocolate has mystical and healing powers. They drank it. An Aztec myth says Questzalcoatl, their god of agriculture, brought them the cocoa tree from Paradise to give them wisdom and power. They called it “bitter water” and evidently were also the first to combine it with honey and vanilla. Both the Maya and the Aztecs used the drink as part of religious ceremonies. The Maya prescribed chocolate for fevers, coughs, and discomfort during pregnancy. 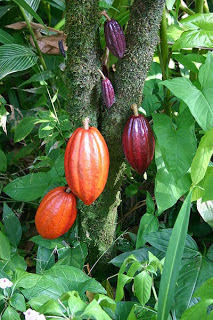 The cacao bean grows on a tree that started out, in prehistoric times, growing wild in the forests, not only of Central America but also in South America, Africa, and parts of Asia. Its botanical name, Theobroma cacao means “food of the gods.” 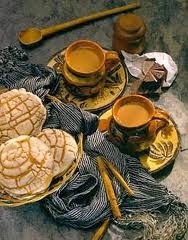 Chocolate is big business now, but so it also was in Mayan times. Their cosmology included a god—Ychaua—who was the patron of the cocoa merchants. The Aztecs used two precious forms of currency: gold and cocoa beans. Columbus brought the first beans to Europe, but he experienced them only as a medium of exchange. Funny money! No Europeans knew what to do with them until Moctezuma gave the sacred drink to Cortes. The explorer brought back to Spain everything needed to prepare the drink, but the monks there thought the substance too powerful for the common person. They kept it a secret in their monasteries and served it only to the nobility. 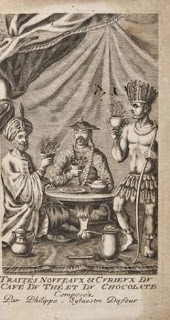 It took an Italian, Antonio Carletti, in the early 1600’s, to bring the drink to the common folk. A century later, chocolate houses were the rage all over Europe, but then in 17th century England and 18th Century France, the places were condemned as hotbeds of sedition and the drink called a dangerous drug. 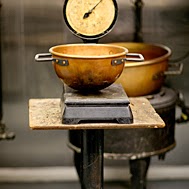 We owe its ubiquitous availability today to a Dutch chemist named Johannes Van Houten, who figured out how to use a hydraulic press to make cocoa powder, and to a Brit named John Cadbury who emulsified the powder into the first chocolate bars. I love those guys! Chocolate is now world wide. These days, it is also grown outside Central America. In fact, almost half of the current supply comes from Africa, from the Cote D’Ivoire.

I commune with the goddess by taking my chocolate in almost any form available, but I prefer creamy bittersweet bars.  I try to never run out, because I never know when the need for a “fix” might hit me.  Chocolate satisfaction can come in many forms.  For a short time, I found on sale a Haagen Dazs flavor called Mayan Chocolate, bitter-sweet with cinnamon.  I loved it.  But I never find it anymore.  I guess there were not enough of my coreligionists in the neighborhood to make it worth the while of nearby stores to stock it.  The chocolate truffles from our local Li-Lac Chocolates are a huge favorite.  On a recent trip to Philadelphia, my daughter and her husband brought me a box of chocolate figs—sweet dried figs stuffed with truffle cream and coated with dark, dark chocolate.  Taken in very small doses, they lifted my spirits for weeks!  I wonder if they are sold by mail order.  Having described them, I want some NOW!
Posted by Janet Rudolph at 10:51 AM

Email ThisBlogThis!Share to TwitterShare to FacebookShare to Pinterest
Labels: Annamaria Alfieri, chocolate, Food of the Gods, Murder is Everywhere

The Pasta Shop in Berkeley has Spanish figs wrapped in dark chocolate, little treats that are as tasty as they are expensive!