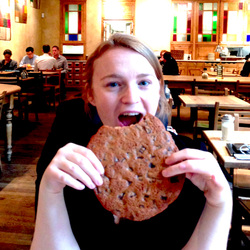 My mystery and chocolate worlds collide again. Today I welcome mystery author Sarah Steding. Sarah is the author of A Diet to Die For, the first book in the Skinny Mystery series. Sarah Steding has cut carbs, calories, white foods, yellow foods, packaged foods, and fatty foods (not all at the same time, or any for more than a few well-intentioned days). She’s tried grapefruit, cayenne-spiced lemonade, macrobiotics, and even gummy bears. While crusading against thunder thighs, she has developed quite a sense of humor about the whole ordeal. She hails from Denver, Colorado and lives in Brooklyn, New York with three little boys and a husband who has learned to say she looks quite slender in those jeans.

I grew up reading mysteries, especially Agatha Christie. I loved the way she spun the stories, directed the readers, and dropped little clues like breadcrumbs along the way. I also grew up loving breadcrumbs, cake, croissants, and basically all carbs—but not loving the spare tire that began accumulating around my middle. So, I combined the two ideas—obsessions, really—in the novel A Diet to Die For. Writing my first mystery novel was so much fun. Dropping the clues into the chapters, and writing the action-sequence ending felt truly electric! 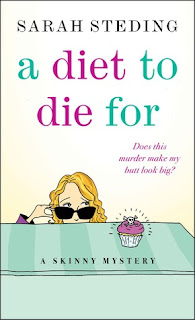 The truth is the main character, Jen Stevens, and I have a lot in common. We can’t resist a juicy mystery and we both ask a lot of questions when people would prefer we just stay out of it. We’re also both totally into cupcakes…. and go back and forth between trying desperately to lose twenty pounds yesterday and convincing ourselves that we should fully enjoy the multitude of pleasurable flavors the world. Life’s too short to count calories right? No, wait, life’s too short to be overweight and unhealthy. One thing’s for sure—life’s too short not to laugh at it!

I'm getting so much exciting, positive feedback from people who relate to Jen Stevens, as she struggles to solve the murder mystery and get her weight under control. I'm so happy and proud to have written a character that people feel like they know when they read the book. In fact, a lot of people have emailed or texted me exactly what they were eating as they read my novel—I've gotten cellphone photos of pound cake, miniature cupcakes, and jars of candies from my readers! (If you read A Diet to Die For and want to send me a picture of your reading snack, email me through my site at sarahsteding.com and I'll post it online!) If you need a reading snack suggestion, here's the low-carb chocolate mousse recipe that's included in the book is below.
Enjoy!

Directions
Put a large mixing bowl into the refrigerator a half hour before begining the recipe.

Place cold water in a medium bowl. Sprinkle in the envelope of gelatin. Add the boiling water and stir until all of the gelatin is dissolved.

Take the bowl that's been chilled out of the refrigerator. Combine sugar substitute, cocoa powder, salt, cream, and the almond and vanilla extracts. Use a mixer on medium speed to beat the mixture until still peaks form. Beat in the gelatin mixture.

Serve in parfait glasses with a dollop of whipped cream and a dusting of cocoa powder.

Email ThisBlogThis!Share to TwitterShare to FacebookShare to Pinterest
Labels: A Diet to Die For, A Skinny Mystery series, Low-Carb Chocolate Mousse, Sarah Steding

Welcome Sarah! Nice to "meet" you. I'm afraid I am quite guilty of not doing much summer reading this year. However, your book sounds delightful and this recipe, well, it sounds delicious!

Thank you to both you and Janet for making my day just a wee bit tastier:)

when is your next book coming out????