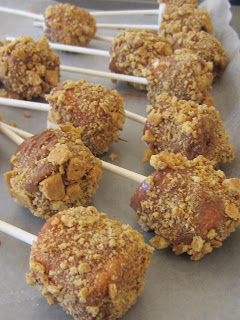 Last summer I posted a recipe for S'mores on a Stick or S'mores Pops. I used Guittard Milk Chocolate (38%) and it was fabulous. Last weekend I made some S'mores pops with some left over dark chocolate, and I just want to say they didn't taste as good to me. I also used some "natural' graham crackers. Nope! I like the old fashioned supermarket grahams for my Smores. So here's the original recipe I posted for S'mores Pops!  S'mores Pops are perfect for a picnic or barbecue. Less mess, no grilling, and oh so tasty.  Perfect way to end the meal.

Ingredients:
Marshmallows (didn't have time to make my own)
Chocolate ( I used several squares of Guittard Milk Chocolate 38%- Fab!)
Graham Crackers (again, not home-made) crumbs  (Crumb the graham crackers by putting them in a plastic bag and using a rolling pin. Don't make them too fine)
Lollipop sticks (I use blunt sticks. Safer than skewers)

Directions:
Melt chocolate in top of double-boiler. (I added a tiny bit of oil to keep it the right consistency. Also since I made a lot of pops, I had to reheat and re-whip.)
Put marshmallow on stick and dip (swirl) in chocolate, coating almost all of marshmallow.
Put graham cracker crumbs in bowl and spoon crumbs over chocolate covered marshmallow. (I found that easier than dipping.)
Place S'mores Pop on cookie tray covered with wax paper. Because I used more chocolate than I needed, I made a few dozen. I placed them in several low clear jars, tied a ribbon, and they were good to go. If it's hot where you are, stick them back in the refrigerator until ready to serve. But you will want to bring them to room temperature before serving, if possible.

Remember you can always experiment with different chocolate. Everyone has a different palette. Experiment.

Posted by Janet Rudolph at 5:36 PM