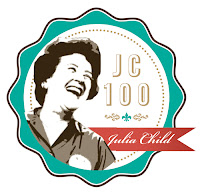 Unless you really live in the back of beyond, you know that today would have been Julia Child's 100th birthday! How to celebrate?

In The Way to Cook, Julia Child wrote that Reine de Saba was the first French cake she had ever eaten and that she never forgot it. What could be more fitting, then, than Julia Child's own favorite Chocolate and Almond Cake-- Reine de Saba with Chocolate Butter Icing? The recipe below can be found in Mastering the Art of French Cooking, Vol. 1, p. 677-78 and The Way to Cook, p. 471.

According to the National Museum of American History at th Smithsonian where Julia's Kitchen is displayed: In the hundredth episode of the television series, The French Chef, Julia made the Reine de Saba, or Queen of Sheba cake. One of the tools she used for making this special cake with the grand name was an ordinary rubber spatula. Essential for folding the smooth and shiny beaten egg whites into the batter, Julia also noted that the rubber spatula was one of America’s great culinary contributions. She kept her spatulas in a ceramic crock on a shelf above her stove.

I must admit that I haven't made this cake in years, but it's not too difficult and it's absolutely fabulous. It's kind of like a dense brownie with creamy chocolate frosting with almonds.

REINE DE SABA [Chocolate and Almond Cake] This extremely good chocolate cake is baked so that its center remains slightly underdone; overcooked, the cake loses its special creamy quality. It is covered with a chocolate-butter icing, and decorated with almonds. Because of its creamy center it needs no filling. It can be made by starting out with a beating of egg yolks and sugar, then proceeding with the rest of the ingredients. But because the chocolate and the almonds make a batter so stiff it is difficult to fold in the egg whites, we have chosen another method, that of creaming together the butter and sugar, and then incorporating the remaining items. - Mastering the Art of French Cooking 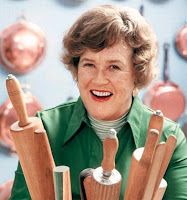 For the cake:
1. Preheat oven to 350°F.
2. Butter and flour the cake pan. Set the chocolate and rum or coffee in a small pan, cover, and place (off heat) in a larger pan of almost simmering water; let melt while you proceed with the recipe. Measure out the rest of the ingredients.
3. Cream the butter and sugar together for several minutes until they form a pale yellow, fluffy mixture.
4. Beat in the egg yolks until well blended.
5. Beat the egg whites and salt in a separate bowl until soft peaks are formed; sprinkle on the sugar and beat until stiff peaks are formed.
6. With a rubber spatula, blend the melted chocolate into the butter and sugar mixture, then stir in almonds, and almond extract. Immediately stir one fourth of the beaten egg whites to lighten the batter. Delicately fold in a third of the remaining whites and when partially blended, sift on one third of the flour and continue folding. Alternate rapidly with more egg whites and more flour until all egg whites and flour are incorporated.
7. Turn the batter into the cake pan, pushing the batter up to its rim with a rubber spatula. Bake in middle level of preheated oven for about 25 minutes. Cake is done when it has puffed, and 2-1/2 to 3 inches around the circumference are set so that a needle plunged into that area comes out clean; the center should move slightly if the pan is shaken, and a needle comes out oily.
8. Allow cake to cool in the pan for 10 minutes. Run knife around the edge of the pan, and reverse cake on the rack. Allow it to cool for an hour or two; it must be thoroughly cold if it is to be iced.
9. To serve, use the chocolate-butter icing recipe below, then press a design of almonds over the icing. 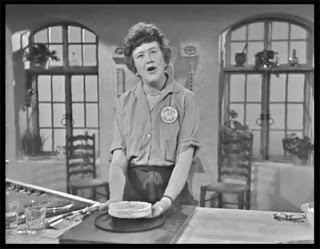 For the Icing:
Place the chocolate and rum or coffee in the small pan, cover, and set in the larger pan of almost simmering water. Remove pans from heat and let chocolate melt for 5 minutes or so, until perfectly smooth. Lift chocolate pan out of the hot water, and beat in the butter a tablespoon at a time. Then beat over the ice and water until chocolate mixture has cooled to spreading consistency. At once spread it over your cake with spatula or knife, and press a design of almonds over the icing.

Reprinted from Julia Child's Mastering the Art of French Cooking

Posted by Janet Rudolph at 7:19 AM

I was going to make this cake in her honor as well!