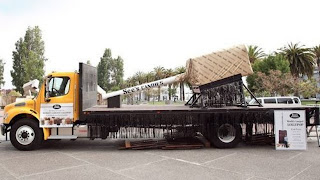 In case you missed this...

The extra large lollipop is a 16-foot, 7-inch confection and is now on display in front of the See's Candies San Francisco flagship store. It's been making the rounds of San Francisco places, including AT &T Ball park.

The Lollipop weighs 7,000 pounds (not including the stick!)

Posted by Janet Rudolph at 9:57 AM

wow that is pretty amazing! Thanks for sharing this.