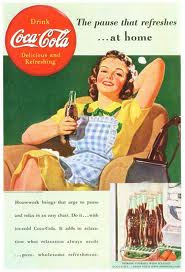 Tonight is the much awaited first episode of the new season of Mad Men, so I thought I should post a "Retro" recipe. Something that Betty might make. Because it's all about the Mad Men, I thought a Chocolate Coca-Cola Cake would be perfect. There are many versions of Chocolate Coca-Cola cake. If you're a Pepsi fan, you can always substitute Pepsi in the recipe. See the Retro Pepsi Ad below. Is that Don Draper in the Ad? Was it his account?

You'll love the instructions. They're pretty retro, too. I couldn't resist, though, posting two different icing recipes (and techniques). Take your pick. So, get out your 'Pyrex' dish and bake!

Sift together the flour and sugar. Heat to boiling point the butter, cocoa and Coca-Cola. Add to the flour and sugar mixture. Stir to blend. Add buttermilk, soda, eggs, salt and vanilla. Stir with a spoon until well blended. Pour into a greased and floured oblong pan (Pyrex dish). Bake at 350 degrees for 30-35 minutes. Batter will be thin. Ice while hot.

Heat to boiling point the butter, cocoa and Cola-Cola. Add confectioners' sugar and vanilla; stir to blend. Using a fork, make holes in the hot cake and pour the hot icing over it. 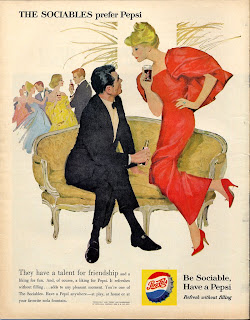 Cream Butter, sugar, and peanut butter. Add milk and stir well. Add nuts. Spread over warm cake. Place iced cake under broiler about 4-inches from heat source. Broil just a few seconds, or until topping starts to bubble. DO NOT scorch! Let cool at least 30 minutes before serving.
Posted by Janet Rudolph at 7:26 AM

I've never watched Mad Men but I know quite a few people who are huge fans. From what I gather, retro and Mad Men go together like two peas in a pod so I'll just have to pass these recipes along. Luv the ads:)

I rarely drink soda but when I do, it's Pepsi! Now, on to the really serious stuff, Broiled Peanut Butter Icing! Oh my heavens! I am all over that!!!

Thanks for sharing, Janet. Any plans for National Milk Chocolate Day:)

I've never tried the broiled icing, but broiled sounds sooo good, even if you burn it a bit. Love burned chocolate and peanuts. "-)

I no longer drink soda, either, but I used to drink a lot of coke. That and gingerale were prescribed for upset stomachs when I was little.

I really love baking cakes and a lot more. Thank you for sharing the recipe and I will try to bake this one as soon as possible. Hope it will be a successful one. Love it.