A native of Bucks County, Pennsylvania, Neil Plakcy has brought murder and canine mayhem back to his home town with In Dog We Trust.  Neil Plakcy is the author of Mahu, Mahu Surfer, Mahu Fire and Mahu Vice (August 2009), mystery novels which take place in Hawaii, as well as the collection Mahu Men: Mysterious and Erotic Stories. His M/M romance novels are GayLife.com (MLR Press, 2009), Three Wrong Turns in the Desert (Loose Id, 2009) and Dancing with the Tide (Loose Id, 2010).  He is co-editor of Paws & Reflect: A Special Bond Between Man and Dog (Alyson Books, 2006) and editor of the gay erotica anthologies Hard Hats (Cleis Press, 2008), Surfer Boys (Cleis Press, 2009) and Skater Boys (Cleis Press, 2010).

Plakcy is a journalist and book reviewer as well as an assistant professor of English at Broward College's south campus in Pembroke Pines. He is a member of Sisters in Crime, vice president of the Florida chapter of Mystery Writers of America, and a frequent contributor to gay anthologies.
Plakcy is also a Chocoholic!


Neil Plakcy's In Dog We Trust and the Chocolate Ear Café

I grew up in a small town in Bucks County, Pennsylvania, about a forty-five minute drive from Philadelphia. I was fascinated, as a kid, by a square stone building in the center of town, which at the time was a ladies’ clothing shop. 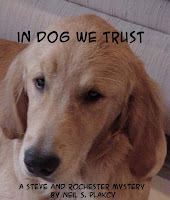 When I started writing my mystery novel, In Dog We Trust, I was doing a lot of freelance food writing, including a couple of pieces for Saveur, and I was particularly obsessed with chocolate. So I gave that obsession to a pastry chef from New York named Gail Dukowski, one of the book’s supporting characters, and put her in that old stone building on Main Street, in a town very much like the one I grew up in, along the Delaware River. Her café is called The Chocolate Ear, a pun on the word chocolatier.

“Gail painted the interior a pale yellow, which made the room seem sunny even in winter, and decorated the walls with vintage posters advertising chocolate products, many of them in French. The white wire tables and matching chairs seemed like they’d come direct from Paris, though they’d been padded with cushions more comfortable to American bottoms.

“The café always smelled of something delicious—lemon tarts, strawberry shortcake, or hot chocolate topped with cinnamon. The glass-fronted case was filled with exquisitely decorated pastries—petit fours covered in white fondant with tiny sugar flowers, individual key lime tarts scalloped with whipped cream, fudge brownies studded with walnuts and chocolate chips. The signature cookie was a chocolate version of the elephant ear, a curly pastry with a rich cocoa flavor. An industrial-quality Italian coffee machine churned out mochas, lattes and cappuccinos, filling the room with the sound of drips and foams.”

My hero, an adjunct college professor, spends a lot of time at Gail’s café. “On my way home from teaching, I often stopped at my favorite spot in town, The Chocolate Ear café, for a raspberry mocha—a reward for reading and grading my students’ ungrammatical papers. The owner, used the best quality beans, Guittard chocolate syrup, and home-made whipped cream, and despite my coffee snobbery I’d been seduced by the sweet drink.”

One of the challenges I faced was finding a way to get Rochester, the golden retriever my hero adopts, to the café. I solved that by putting a couple of tables and chairs out on Main Street, and making Gail a dog lover who always has a couple of fresh-baked dog biscuits on hand for Rochester—though not chocolate, of course. All the characters in In Dog We Trust, good and bad, know that dogs shouldn’t eat chocolate. (Cue the ominous music. Though squeamish readers should know that no dogs were harmed in the writing of this book.)

One of Gail’s specialties is chocolate-chip cheesecake, and though her recipe is probably fancier than mine, I think mine is pretty good. I got it from our cleaning lady, Helen Wielninski, who first made it for me when I was a teenager. I’ve tweaked it since then, but in her honor I still call it Helen’s Cheesecake.

Leave the cheese out to soften. Combine crumbs and butter and press into the bottom of a 9” springform pan.

Cream the cheese with a wooden spoon, and then, using an electric beater, add in the eggs, one at a time. Then mix in the flour, sugar, salt and vanilla. Beat until there are no more lumps, then add in the chocolate mini-chips. Regular chocolate chips are too heavy for the batter and will sink to the bottom—though you can always add some if you like, to enhance the chocolate flavor of the crust.

Pour into the springform pan. If you prefer your cheesecakes without a crack down the center, you can place in the pan in a tray of water. I don’t mind the crack, because it lets me see into the creamy heart of the cake, with those little chocolate bits of deliciousness smiling back at me.

Bake at 500 degrees for 15 minutes. Turn the oven down to 250 degrees and bake for an additional 40 minutes. Then turn the oven off and let the cake cool in the oven for one hour.

In Dog We Trust is available at Smashwords and for the Kindle.
Posted by Janet Rudolph at 4:23 PM

The recipe sounds delicious and the book sounds interesting.

This is a great recipe if you like your cheesecake thick and rich. I used to sell it by the slice at street fairs when I was in college.

Thanks, Neil, for sharing. Can't wait to read your new book. Topper, my golden retriever, looks a lot like your golden.