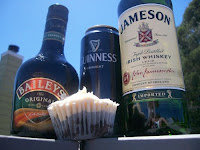 An Irish Car Bomb is a drink that can be ordered in an Irish Pub--or the Bar on the corner.  To make an Irish Car Bomb, take a shot glass of  1/2 Bailey's Irish Cream mixed with 1/2 Jameson's Irish Whiskey dropped into  3/4 pint of Guinness. Then chug it down before it curdles. And, yes, the name refers to the notorious car bombings used by the Provisional Irish Republican Army during the "Troubles." Not exactly a P.C. name for the drink in these times.

According to Wikipedia, the Irish Car Bomb was created in 1979 by Charles Burke Cronin Oat, former owner and bartender of Wilson's Saloon, in Norwich, CT. The drink evolved from several earlier versions dating back to 1977. The Grandfather, the original idea behind a Car Bomb, was a mixed shot of Bailey's and Kahlúa coffee liqueur.  Oat was inspired to add Jameson Irish Whiskey to the shot, which made the shot bubble up vigorously like an explosion, causing him to remark that "the IRA just showed up!" Hence, the newly designed shot was known as the IRA. Two years later while drinking IRAs and Guinness, Oat got the idea to drop the shot into his half-finished pint of Guinness, with the words "Bombs away!" and the Irish Car Bomb was born.

The drink later spread beyond the city of Norwich due to increased advertising by Guinness beginning in the late-1980s. While Kahlúa was part of the original recipe, it is often dropped from the drink today. Some refer to that original recipe as a Belfast Car Bomb.

O.K. maybe not your cup of tea, but when you add chocolate to the same ingredients and bake it as a cupcake, it will be. Yesterday I mentioned Irish Car Bomb Brownie Bites, but I thought I should link to a recipe for the original cupcakes.

Smitten Kitchen has a recipe for Guinness Chocolate Cupcakes with Ganache Filling and Bailey's Frosting. This recipe makes spectacular Irish Car Bomb Cupcakes. (See recipe below or go to the Smitten Kitchen site for recipe, photos and comments)*

Want an easier recipe? Jonas over at Drink of the Week has a recipe for Irish Car Bomb Cupcakes using a chocolate cake mix. He replaced half the water in the recipe with Guinness.  He then made a whiskey chocolate ganache and topped it with a Bailey's whipped cream topping. The recipe was inspired and adapted from the Smitten Kitchen.

There are a lot of variations on this recipe, and I'll bet they're all good. How can you go wrong with Guinness, Jameson's and Bailey's? Erin Go Bragh!

For the cupcakes:
1. Preheat the oven to 350 degrees. Prep a cupcake pan with liners or spray with Pam
2. Melt the butter in a saucepan with the Guinness. When the butter is melted, whisk to combine, then stir in the cocoa powder. Set aside to cool a bit.
3. Combine the flour, sugar, baking soda, and salt in a small bowl.
4. Beat the eggs and the sour cream together in a mixer. Slowly pour in the cooled chocolate-beer-butter mixture and mix to combine. Slowly pour in the dry ingredients and mix to combine.
5. Pour the batter into the prepared cupcake pan, filling each about 3/4 of the way.
6. Bake for 16-18 minutes, then set aside to cool on a cooling rack.

For the ganache:
1. Heat the cream in a saucepan until it is just simmering.
2. Pour the simmering cream over the chocolate in a heatproof bowl.
3. Whisk vigorously to melt the chocolate with the cream. If the chocolate isn't melting sufficiently, you can microwave for a few seconds.
4. Whisk the butter and whiskey into the ganache. The texture should be smooth and creamy.
5. Set aside to cool.

For the frosting:
1. Beat the butter in a mixer for 4 minutes until it is very fluffy.
2. Slowly add the confectioners sugar a few tablespoons at a time, making sure it is incorporated before adding more to ensure a lump-free frosting. You may not need the entire 6 cups of sugar.
3. Mix the Baileys into the frosting.

To assemble the cupcakes:
With an apple corer, core the center of the cooled cupcake. You can also use a small knife to do this. Fill the holes with the cooled ganache. Frost the Cupcakes with the Bailey's Frosting.
Posted by Janet Rudolph at 7:58 AM

I'm not sure about this but I must admit, the cupcakes sure sound good! Thanks for sharing...

An Irish Car Bomb is a tasty little Irish variation of the common boilermaker. This high octane drink is usually made up of three quarters of a pint of Guinness stout beer, one half shot of Bailey's Irish Cream liqueur and one half shot of Jameson Irish Whiskey.
http://irishcarbomb.com/