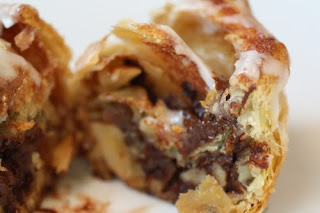 I spend a lot of time at Serious Eats, and lucky for me and now you, they featured the following recipe for Pain au Chocolate Cinnamon Rolls from French Revolution. So not only did I find a great recipe, but I have a new Blog to follow. You'll want to do that, too. Kerry at The French Revolution kindly permitted me to re-blog her recipe. I can't thank her enough. This is so great!

This is a great and easy recipe, especially because you can use store-bought pastry.

Kerry's Note on Some Ingredients:

Think ahead when using bought puff pastry. The best way to do so is by tossing the pastry from the freezer to the fridge before you go to sleep. It will be perfect in the morning.

To toast nuts, scatter the nuts on a baking sheet and place them in an oven between 300 and 350°F for 10 minutes. You can also toast them in a dry pan. When you can smell them and they begin to get golden cheeks, they’re ready.

If you're using chocolate chips, make sure they are a great quality dark chocolate chips. You’ll notice the difference. They are the star of the show. (I use broken up chocolate pieces, but then there's always extra chocolate around-Janet)

You can make your own crème fraîche cheaply at home, simply stir together equal parts heavy cream and sour cream, and let stand in the fridge overnight.

2. In a small bowl, combine the 2 sugars and the cinnamon.

3. Roll out both sheets of puff pastry slightly, into two identical squares. Brush the pastry all over with the cooled melted butter.

4. Scatter half the cinnamon sugar all over one puff pastry square, and the other half all over the other. Do the same with the walnuts, and the chocolate chips or pieces.

5. Roll the sweetened puff pastry squares up into logs, as if you were making a jelly roll. Using a serrated knife, trim just the edges off the sides of the logs. Then cut each log into 6 identical Pain au Chocolat Cinnamon Rolls.

6. Spray a 12-cup muffin pan with nonstick cooking spray. Into each muffin cup, place one cinnamon roll, swirl-side up. Bake for 25-30 minutes. Check them at 25 minutes, and they should be golden and puffed. If not, allow them to go for a few more minutes, but you want to pull them before golden turns to brown.

7. Meanwhile, prepare the glaze. In a bowl, whisk together the powdered sugar, crème fraîche, and half and half until the glaze has a smooth, even consistency. Set aside.

8. When the cinnamon rolls are done in the oven, transfer them to a plate and allow them to cool slightly. When they are still warm, but no longer hot, drizzle the crème fraîche icing all over the tops of the Pain au Chocolat Cinnamon Rolls. Allow the glaze to set for about 5 minutes, and serve still warm.

Is this not divine? I'm just dying for them now!

About the author: Kerry Saretsky is the creator of French Revolution Food, where she reinvents her family's classic French recipes in a fresh, chic, modern way. She also writes the The Secret Ingredient series for Serious Eats.
This recipe above appeared on Serious Eats and on the original site French Revolution (French Food for the Au Courant Kitchen) here. Reprinted with permission.

Photo copyright French Revolution
Posted by Janet Rudolph at 8:53 AM

If I didn't already like chocolate...this would definitely make me into a Chocoholic! Thanks for all the temptations! Deb

I know.. so many great chocolate recipes and treats out there.

Mmm... sounds yummy!
I'm going to have to try this!

Can't say that I've ever seen such a treat (cinnamon and chocolate) in a French boulangerie, so I might have to try this myself. Especially since you used premade puff pastry. Thanks.