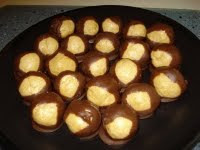 Lesa Holstine whom I follow on Twitter and on her Blog Lesa's Book Critiques (Books and Authors, with an emphasis on Mysteries) just blogged on Mystery Lovers' Kitchen about her Buckeye Candy. I knew what a buckeye was, but not buckeye candy! Most of you know that I have cross-over passions for mystery and chocolate. So I was thrilled when Lesa Holstine who reviews just about everywher 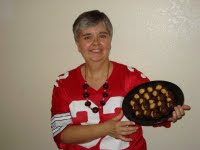 e and now for Mystery Readers Journal sent me a link to her guest blog on Mystery Lovers' Kitchen. I knew she needed to be guest blogger here. It's all about the Chocolate! Her buckeye candy sound scrumptious.

Janet always has such wonderful chocolate recipes here, that it's an honor to include my Buckeye Candy recipe. I'm not really a cook. I'm a librarian, book reviewer and blogger at Lesa's Book Critiques. But, anyone can make this simple candy recipe. And, if you want a simple recipe that husbands and kids will rave about, one that tastes better than peanut butter cups, this is it.

I'm always surprised when people say they haven't heard of buckeyes. I’m originally from Ohio. I’ve lived in Florida and Arizona, and the only people I knew in both states who made buckeyes were from Ohio. If this isn’t the state candy, it should be. But, first a little history.

The Ohio Buckeye tree is a deciduous tree from the Horsechestnut Family. The Forestry site for the State of Ohio says, “The name “Buckeye” was derived from the Native Americans who noticed that the glossy, chestnut-brown seeds with the lighter circular “eye” looked very similar to the eye of a buck (male) deer.” They also roasted, peeled and mashed the buckeye nut which they called Hetuck into a nutritional meal. The poisonous and bitter taste can be eliminated by heating and leaching. But, remember, this is a poisonous nut! Some believe that the buckeye relieves rheumatism pain. The symbol of General William Henry Harrison's presidential campaign was a string of buckeyes and a log cabin decorated with raccoon skins. His campaign song called Ohio the bonnie Buckeye state, as a result citizens in Ohio became know as "Buckeyes ." On October 2, 1953 the buckeye tree officially became the state tree.

And, here’s the sports connection. Ohio State teams are known as Buckeyes, and, OSU fans always say buckeyes are poisonous to Michigan Wolverines. (And, of course, Michigan fans say Buckeyes are just a bunch of nuts.) We even make necklaces out of buckeyes, and wear them on game day. 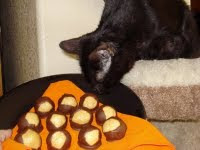 Naturally, the candy called buckeyes, that look like the nut, are popular throughout the state. And, those of us who love our Ohio State Buckeyes have taken the candy throughout the nation. Now, I have the chance to pass the recipe on to you.
You can find all kinds of recipes for them online. Here’s the one my mother passed on to her daughters (all Ohio State fans).

This gives a nice shiny color to the buckeyes, just like the nut. However, I do these the lazy way because I just can’t keep those peanut butter balls on a toothpick. I refrigerate the dough so it sets, and then roll the dough in about 1 inch balls, and dip them in Baker’s Dipping Chocolate, instead of using the chocolate mixture. They might not be quite as shiny, but the buckeyes are eaten just as quickly!

You can serve buckeyes on Saturdays at parties during football season. They also make a wonderful Christmas candy. Or, serve them at Halloween parties. If you want to make them look like eyeballs for Halloween parties, add black food coloring or chocolate chips for eyeballs. Even little black cats like Josh are interested in buckeyes.

I hope you try buckeyes. Your family will thank you for them.

And, I thank Lesa for her very 'enlightening' guest blog!
Posted by Janet Rudolph at 6:50 AM

Yay Lesa! Spread the word about Buckeyes! I'm so egocentric that I had no idea people didn't know about them...could you send me some, too? Ha! Just kidding!

Now, Jen! You already knew about buckeyes, and you probably have a recipe that works for you.

I'm with you. It wasn't until I moved to AZ that I discovered everyone doesn't know about buckeyes. Then, I realized half the library staff in Lee Cty, FL was from Ohio, so, of course, everyone there knew about them!

Best homemade candy in the world! (or at least in Ohio - smile)

Thanks for asking me to share the buckeyes, Janet! It's a fun recipe that tastes wonderful. Just ask, Jen. (grin)

So glad you shared. Can't wait to make them!

Oh yes; I think it's illegal to live in Ohio and not have a recipe for Buckeyes! ;) But there also must be a Buckeye bandit. No matter how many you make, they just seem to vanish!

Thanks so much for the recipe. I surely could use this on my fathers birthday this next month. If I may ask, do you have any suggestion for a 50 heads guest. I wanted to surprise my dad. with delicious sweets. Thanks Lesa!

I don't know what you mean by a "50 heads guest". Do you mean, makes 50? You can easily make this recipe for 50. Actually, I always find it makes more than 4 dozen.

If you're looking for something other than this recipe, perhaps some of Janet's archived recipes will help. The site is "Dying for Chocolate." I'm sure there's something suitable here.


I hope your father likes buckeyes, if you do make them!