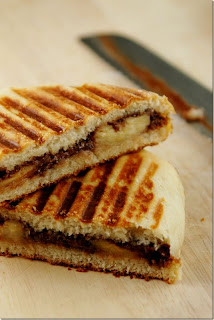 The Internet Chef listed 9 of the Funkiest Chocolate Recipes on the Web. They surely are odd and amazing, and I've actually posted several of them myself.

The first is Barbecued Bananas. There is nothing easier and better, and your dessert will definitely be the hit of any barbecue if you make these. In July I mentioned the Bay Area Bites recipe that also added butterscotch or peanut butter chips to the chocolate chips. A variation.

Another variation on one of these recipes is Lilly's Totally Edible 2-minute Wholemeal Chocolate Cake Miracle. It's a variation on the 5 Minute Chocolate Cake in a Mug that I posted last May. I think the wholemeal self-raising flour will make a slight difference in flavor. I'll try it and let you know.

If you've been reading this blog very long, you know I'm a sucker for anything with bread and chocolate. I've posted a few Chocolate Panini Recipes, including Chocolate Bacon Panini and Chocolate Strawberry Panini, a few chocolate sandwiches for the grill. Pink Bites has an great recipe using homemade potato-buttermilk rolls for Chocolate Banana Panini. What could be better than chocolate and bananas? If you don't have time, I'm sure you can substitute some great potato bread rolls or Italian rolls in this recipe. Brioche would be great, too, with its hint of sweetness. Just don't use an herb or olive bread.

Peel the banana and slice it lengthwise then crosswise, making 4 pieces. Melt the butter in a skillet and sprinkle it with cinnamon. Add the bananas and cook until they are just browned but still firm, turning once. Set aside, do not clean the skillet (just yet).

Split rolls open and wipe the skillet's butter with them (now you can wash the skillet.). Divide bananas into rolls and top with chocolate chips, as much as you want. Close sandwiches, butter outside of rolls and place on a hot panini maker. Grill them until chocolate has melted.

You can also make this in a skillet, but I love a panini press for the cool lines it makes and the crunchiness.

Don't forget to check out all the other "Funky" chocolate recipes. I would call them innovative, decadent, a bit weird, easy and delicious.

Photo by permission: Pink Bites
Posted by Janet Rudolph at 8:38 AM

Sometimes I come here just to look at the pictures...but today I'm stopping by to let you know I've included you in the award I'm passing on today (Thursday) at http://patriciastoltey.blogspot.com

Please stop by when you have a chance. Meanwhile, I'll be thinking about chocolate banana paninis all day...

Thanks so much, Patricia. And, its true--there's nothing more gorgeous than chocolate. :-)

Janet, these sound scrumptious! Thanks for sharing the links, too.

Perhaps if I had my first Panini prepared like this, I would like Paninis. Oh, okay, you've convinced me. I won't completely dismiss them. This sounds too good to resist!