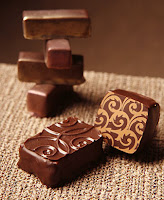 Who knew that Philadelphia was a Chocolate City? I guess I shouldn't be surprised. Once I left Philly, the town obviously developed into a full-fledged foodie mecca. I, of course, left for California, and Berkeley, specifically, the epicenter of the modern food movement.

My memories of Philadelphia chocolate were of Hershey's, of course, and we visited the factory many times. O.K. Hershey, PA, is not in Philadelphia. Then there was Whitman's! I loved Whitman Samplers, especially since there was a 'map' in the top of the box that showed you which candies were where (unless of course your sister moved them!). I loved the Fudge on the Boardwalk in Atlantic City, but I don't remember too many actual chocolate shops, but then I was a kid. I was big on penny candy, and most of that was not chocolate. Limited budget, limited allowance.

So, I was thrilled when Twitter Buddy Janice Bashman (yes, my mystery and chocolate worlds collide again) sent me a link to an article on Chocolate City in today's Philly.com. Lots of wonderful info on indie chocolate makers and an industry that is still booming despite the economic downturn.

For the vanilla cream:

For the hot chocolate:

1. Sprinkle the cornstarch over 1/2 cup of the milk in a small bowl and whisk to dissolve. Add the sugar and egg yolks and whisk well.

2. Bring the remaining 2 cups of the milk and the vanilla bean just to a simmer in a heavy-bottomed medium saucepan over low heat. Remove the bean, scrape the vanilla seeds into the milk, and discard the bean. Gradually whisk the egg yolk mixture into the milk.

3. Cook, whisking often, until the sauce comes to a boil, about 3 minutes. If using vanilla extract, stir it in now. Strain through a wire sieve into a bowl.

4. After the vanilla cream is prepared, combine it with the chopped chocolate chunks and a cup of milk, brought just to a boil. Mix until smooth.

Note: Any flavor can be added - raspberry, cinnamon, holiday ginger spice, marshmallows. You can substitute milk or white chocolate for the semisweet chocolate.

Posted by Janet Rudolph at 9:03 AM