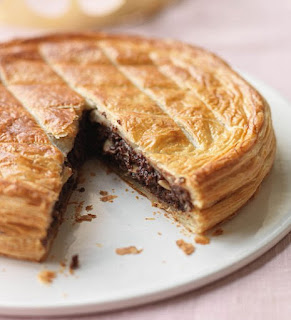 The Twelve Days of Christmas comes to an end today with Epiphany. For many centuries this involved a feast, including the King Cake. Whoever found the bean hidden inside was the Lord of Misrule until midnight.

This version of Twelfth Night King Cake is made from puff pastry and filled with almond and chocolate cream. Serve warm, decorated with a gold paper crown for the Lord or Lady of Misrule to wear for the night. This recipe for King Cake comes from the Queen of Cakes, Mary Berry! And, what's more fitting for a King Cake than Chocolate?

No time to make this? Make a chocolate bundt cake and put a bean or chocolate coin inside.  Use a 'castle' shaped Bundt pan.

Measurements are UK..but you can easily convert to US with an online calculator

1 ceramic or dried bean  (or chocolate coin! After all, this is a chocolate blog!)

Roll out half the pastry on a lightly floured worktop until slightly thinner than a pound coin. Cut out a round about 24 cm in diameter. Set on the lined baking sheet and cover with clingfilm. Roll out the rest of the pastry in the same way and cut a second round. Set this on top of the clingfilm, then cover the whole lot with clingfilm. Chill while making the filling.

Put the chocolate into a heatproof bowl and set over a pan of steaming hot but not boiling water (don’t let the base of the bowl touch the hot water). Leave to melt gently. Remove the bowl from the pan. Stir the chocolate until smooth, then leave to cool.

Beat the butter until creamy with a wooden spoon or electric mixer. Beat in the sugar, then beat thoroughly until the mixture looks pale and fluffy. Beat the egg with the yolk until just combined, then gradually add to the butter mixture a tablespoon at a time, beating well after each addition. When the mixture is very light in colour and texture gently, stir in the ground almonds, flaked almonds and almond extract followed by the cooled chocolate. Cover the bowl and chill for 15 to 20 minutes.

When ready to assemble uncover the pastry, and remove the top round and clingfilm. Spoon the chocolate filling onto the pastry round on the baking sheet, mounding it slightly in the middle, and leaving a 2 cm border uncovered all around the edge. Push the bean into the filling, not too close to the centre.

Brush the pastry border with beaten egg, then gently lay the second pastry round over the filling. Press the edges firmly together to seal. Holding a small knife blade at right angles to the side of the pastry, ‘knock up’ the edge all around by making small indentations in the pastry. Then scallop the edge by pulling the indentations in at 2 cm intervals with the back of the knife. Brush the top of the pastry very lightly with beaten egg to glaze and chill for 20 minutes. Meanwhile, preheat the oven to 220C/200C fan/425F/gas 7

Brush the top a second time with the beaten egg glaze, then score a diamond pattern with the tip of a sharp knife. Make a couple of small steam holes in the centre. Bake for 25 to 30 minutes or until the pastry is a golden brown and crisp. Leave to cool slightly before serving.

TIP Remember to tell guests to look out for the inedible bean!

Posted by Janet Rudolph at 8:43 AM

I'm intrigued that it's made free form, with out any pan. I was expecting a springform pan or the like.

I have a photo of a friend's Galette de Roi.. I love the imperfect crust. Unfortunately I can't post it in the comments.