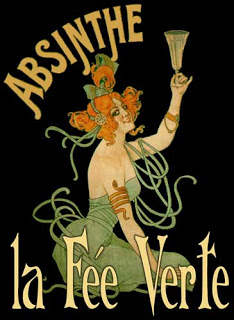 Wormwood, the one that's gained the most notoriety, is Artemisia absinthum, an herb that grows wild in Europe and has been cultivated in the United States as well. Much of the liquor's legendary effect is due to its extremely high alcohol content, ranging from 50% to 75% (usually around 60%), plus the contribution of the various herbs. It has been assumed by  that the so-called "active ingredient"in absinthe is wormwood, although that is apparently not really the case.

The drink was referred to in France as "La Fée Verte" or The Green Fairy which is a reference to its green color (depending on the brand). The color usually came from the chlorophyll content of the herbs used in the distillation process; however, some disreputable manufacturers added toxic chemicals to produce both the green color and the louche (or clouding) effect that in reputable brands was caused by the precipitation of the essential oils of the herbs. It is quite probable that the bad reputation absinthe developed was due to these low-grade and perhaps quite poisonous version of the real thing.

Absinthe was very popular in fin-de-siècle Paris, with Vincent Van Gogh, Paul Verlaine, Alfred Jarry and Oscar Wilde among its most famous imbibers. And, of course, there was Edgar Allan Poe.

For this year's holiday, I'm posting an easy Chocolate Absinthe Bundt cake recipe. You have to like Absinthe to really enjoy this cake. Always use a name brand absinthe. Just an FY: Absinthe is an acquired taste. What I like about this recipe is that the absinthe flavor is enhanced by the anise and fennel seed (you can actually use 1/8 tsp each for more flavor). Original recipe from Epicurious.

Directions
Beat butter at medium speed with electric mixer until fluffy. Gradually add sugar, beating well. Add eggs, 1 at a time, beating until blended after each addition. Add absinthe; beat until blended.
Combine flour and next 5 ingredients; add to sugar mixture alternately with hot water, beginning and ending with flour mixture. Beat at low speed until blended after each addition; stir in flavorings.
Pour batter into greased and floured 9-inch bundt cakepan.
Bake at 300° for 60 minutes. Cool in pan on wire rack for 10 minutes. Remove from pan, and cool completely on wire rack.
Posted by Janet Rudolph at 7:48 AM