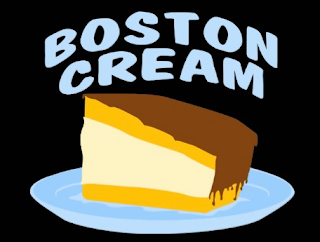 Directions
Preheat oven to 350 degrees F. Butter 9-x-13” pan and sprinkle with flour.
Prepare cake mix according to box instructions. Pour into prepared baking dish and bake until toothpick inserted in middle of cake comes out clean, about 25 minutes. Cool cake.
When cake is cool-ish, poke big holes across entire surface of cake using rounded end of wooden spoon.
Combine pudding mix and milk in medium bowl and whisk until mixture just begins to thicken. Pour over cake and spread with spatula to make sure pudding pours into holes. Cover and refrigerate for 2 hours.
After cake has been refrigerated for 2 hours, make ganache. Put chopped chocolate in medium glass bowl and set aside. Meanwhile, bring heavy cream to simmer in small saucepan. When bubbles start to break surface, pour hot cream over chopped chocolate and whisk until mixture is smooth. Pour ganache over the pudding layer of the cake and serve.
Posted by Janet Rudolph at 8:12 AM

This is tempting. I ate Boston Cream Pie fairly often as a kid growing up on the East Coast but never see it out here in CA. What if I made one (perhaps not with packaged pudding) or Thanksgiving instead of or in addition to pumpkin pie? It's an idea!