Red White and Blue Trifle: 2 Recipes for the Fourth of July 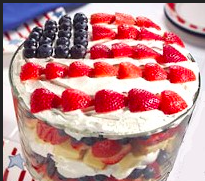 I'm a big fan of Trifle. It's easy and pretty. You can add alcohol or not, but traditional trifles include it.  I love a tipsy trifle! I always use a clear bowl.. It's great to see the layers. Here are two Trifle recipes that are delicious and great Fourth of July show stoppers.

The first recipe is from Taste of Home, one of my go-to sites. I love the flavors in this one. Interestingly, it doesn't include cake, but you can always add a layer of pound cake or angel cake if you want to be more traditional. You can decorate the top of either trifle with a flag pattern made of strawberries and blueberries and whipped cream.

The second recipe for Red White and Blue Trifle  is adapted from All Recipes. It has the added flavor of white chocolate pudding. For the second recipe, you can make your own pound cake or buy prepared. The original recipe called for a small amount of coconut liqueur in the whipped cream/pudding. If you want to add alcohol, I would add a Tbsp of White Chocolate Liqueur to the whipping cream, instead.

Those would be good any day. One reason to make trifle is because your cake fell apart. So it has to have cake!
best... mae at maefood.blogspot.com