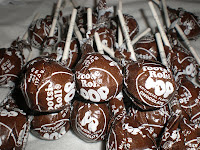 And, for those of you who prefer their Tootsie Pops in a Glass, here's a recipe to celebrate the day.