Day of the Dead Chocolate & Recipes 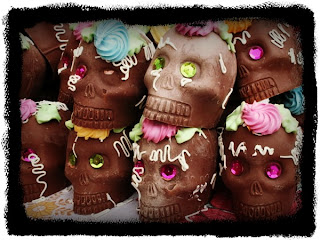 Day of the Dead focuses on gatherings of family and friends who pray for and remember friends and family members who have died. The celebration takes place on November 1st and 2nd in connection with the Catholic holiday of All Saints Day which occurs on November 1st and All Souls Day which occurs on November 2nd. Traditions include building private altars honoring the deceased, using sugar and chocolate skulls, marigolds, and the favorite foods and beverages of the departed, and visiting graves with these as gifts.

Many cultures and countries celebrate Day of the Dead, but in Mexico and parts of the U.S and Canada it's tied to an historic Meso-American holiday that originated with the Aztecs 3000 years ago or earlier. When the Spanish Conquistadors landed in what is now Mexico 500 years ago, they found the natives practicing this ritual that seemed to mock death. It was a ritual the Spaniards tried unsuccessfully to eradicate. Although the ceremony has since merged with Catholic theology, it still maintains the basic principles the Aztecs intended, a view that death is the continuation of life. Life was a dream and only in death does one become truly awake.

Many people believe that during the Day of the Dead, it's easier for the souls of the departed to visit the living. People go to cemeteries to communicate with the souls of the departed, and build private altars, containing the favorite foods and beverages, as well as photos and memorabilia, of the departed. The intent is to encourage visits by the souls, so that the souls will hear the prayers and the comments of the living directed to them. Celebrations can take a humorous tone, as celebrants remember funny events and anecdotes about the departed.

Mexican hot chocolate is one of my favorites. In Oaxaca during the Day of the Dead (and other times), the many chocolate shops serve hot chocolate that is a mix of cocoa beans, cinnamon sticks, almond and sugar ground together into a paste, then grated down and mixed with steaming milk. You can make a similar version easily at home. As always use the very best chocolate.

Day of the Dead Hot Chocolate

Directions
Mix all ingredients, except milk, together in an empty, clean glass jar. Shake until completely combined.
Heat milk in pan and add chocolate mix. Bring to boil and reduce heat.
Simmer for about 2 minutes, stirring constantly; use small whisk to froth milk. Serve hot.

3. In large bowl over saucepan of simmering water (water shouldn't touch bottom of bowl), combine chocolate and butter. Stir occasionally just until chocolate is melted and mixture is smooth, about 8 minutes. Remove from over water and whisk in 1/3 cup chile purée, the egg yolks, vanilla, and flour until mixture is blended.

4. Pour brown sugar into small bowl and stir or whisk to break up lumps and loosen. In large bowl, with electric mixer on high speed, beat egg whites and cream of tartar until very frothy and foamy. Gradually add brown sugar to whites, beating until stiff, moist peaks form. With whisk, fold third of beaten whites into chocolate mixture until well incorporated. Then fold in remaining whites just until blended. Scrape batter into prepared pan.

5. Bake cake in 425° regular or 400° convection oven until set and center barely jiggles when pan is gently shaken, about 15 minutes. Let cool in pan on a rack for about 15 minutes. Run a knife between cake and pan rim, then invert onto  serving platter. Lift off pan and peel off parchment. Let cake cool about 30 minutes, then chill until firm and cold, at least 4 hours; cover cake once completely chilled.

6. For best texture, let cake come to room temperature before serving, 45 minutes to 1 hour. Sift powdered sugar lightly over cake (for pattern, lay  stencil on cake before sifting sugar, then carefully lift off).

7. In bowl, beat whipping cream until soft peaks form. Stir in vanilla. Cut cake into wedges and serve each with dollop of whipped cream. 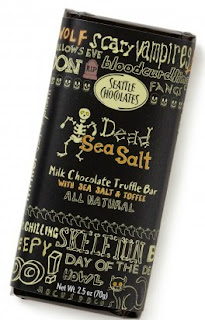 Posted by Janet Rudolph at 7:16 PM