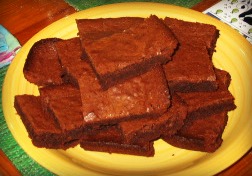 Back in the 70s I was very influenced by Frances Moore Lappe’s Diet for a Small Planet. I began making her baked desserts, which called for both soy and whole wheat flour. Then I discovered that this combination of flours–I changed over to rye a few years later–using organic flour–was easy to substitute for white flour in recipes with spices or chocolate, so I was soon making healthier gingerbread, chocolate cake, brownies, oatmeal cookies, and chocolate chip cookies. Of course, there is still sugar, but the combination of soy and a whole grain flour creates a complete protein, as good as a meat protein. You need a little less flour than with white flour.

I’ve always lived simply, saving money to buy time to write, staying healthy by eating a mostly vegetarian diet and making even my desserts and snacks as healthy as possible. Since 1999, when I owned my first land, I’ve been growing organically as much of my food as possible, too.

In 2000 I self-published my PMZ Poor Woman’s Cookbook. I myself by then had been through menopause with relative ease, and I’d followed the advice I finally found after much hunting: stay active, get plenty of exercise, allow yourself to carry a little extra weight, and eat soy, which the Japanese women have found useful in menopause. Then when your menstrual cycle finishes, you’ll be ready for the zest period. My pmz years have been active, challenging, and zesty. I’m 76 now and feel I’m in my prime. I’ve begun publishing more books, having written hordes of unpublished ones. This fall I have both a poetry book, Beaver Soul, and a second mystery in my Penny Weaver series coming out: Farm Fresh and Fatal, which takes place at a farmers’ market in a small North Carolina town. My heroine, Penny Weaver, uses the recipes in PMZ Poor Woman’s Cookbook.

When I myself sold at my local market, as well as vegetables, I also sold my high protein rye-soy loaf, sweet breads like gingerbread, pumpkin bread, and applesauce cake, as well as healthy brownies.

Here’s the brownie recipe. Be sure and use organic flour. It sold at the market and has been a favorite with my children and grandchildren. My son says, “After I eat your brownies, Mom, I don’t go up high and then get dropped like a rock, as I do when I eat a candy bar. Instead, I keep the energy.”

Cool on a rack in the pan and cut in squares.

***
More about Farm Fresh and Fatal:

When Penny Weaver joins the new Riverdell Farmers’ Market to represent their neighborhood garden, squabbles break out among the farmers about their places. The county poultry agent tries to sort them out before Nora, the market manager, arrives, infuriating her. Penny discovers that there may have been racism behind her friend Sammie’s almost not being accepted to sell her flower bouquets. After the third market, the poultry agent is found dead of food poisoning, apparently from drinking the punch provided by Nora. That and her fights with him cause her to be arrested. Meantime Penny is skeptical of her daughter’s new sponging boyfriend, and her husband Kenneth confesses to being homesick for Wales.

Penny and Sammie work to uncover the real poisoner and to release Nora. Derek, the lead detective and Sammie’s husband, wants them to stay out of it. The poultry agent was unpopular with the quirky farmers, with the exception of the genetically modified seeds man and the baker/jelly maker. Penny and Sammie discover that the poison was black nightshade, but which farmer grows it and who put it in the poultry agent’s punch? The state ag department threatens to close the market, if the case isn’t solved.

***
What others are saying about the Penny Weaver mysteries:
***
Praise for Killer Frost: A charming puzzler of a traditional mystery, this classic academic mystery debut is a pageturner populated with layered, interesting characters. My hat is off to Judy Hogan on a stellar debut. I look forward to the further adventures of Professor Penny Weaver at St. Francis college! –Julia Spencer-Fleming, New York Times Bestselling Author of One Was A Soldier. Farm

Fresh and Fatal features an appealing protagonist, an intriguing background, and well-realized characters. Readers will enjoy these characters and empathize with their successes and failures. In the tradition of Margaret Maron. –Carolyn Hart, author of Dead, White, and Blue.

In Farm Fresh and Fatal Hogan serves up a complex dish that is flavored with community and family drama. It is spiced with intrigue, finished with mystery and delivered right off the vine. –Lyle Estill, President, Piedmont Biofuels and author of Small is Possible

I didn't know Healthy and Brownies could be used together. I need to try this recipe. I am a Chocoholic...so I love your blog.

Wow, so easy to whip up! I'm adding this to my recipe box.