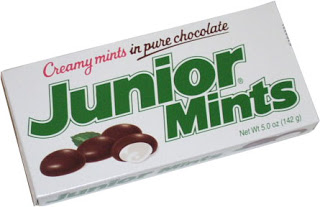 Today is National Chocolate Mint Day... the perfect food holiday to write about one of my all time favorite candies -- Junior Mints. Also with the Oscars coming up this weekend, it's the perfect time for a Junior Mints post. I love Junior Mints at the Movies!

Definition: Junior Mints are a candy consisting of small rounds of mint filling (with a dimple on one side) inside a dark chocolate coating. They are currently produced by Tootsie Roll Industries.

History: Junior Mints were introduced in 1949 by the James O. Welch Company, manufacturers of candies and candy bars such as Sugar Babies, Welch's Fudge, and Pom Poms. The name of the product is a pun on Sally Benson's Junior Miss, a collection of her stories from The New Yorker, which were adapted by Jerome Chodorov and Joseph Fields into a successful play, directed by Moss Hart. Junior Miss ran on Broadway from 1941 to 1943. In 1945, the play was adapted to film, with George Seaton directing Peggy Ann Garner in the lead role. The Junior Miss radio series, starring Barbara Whiting, was being broadcast weekly on CBS at the time Junior Mints were first marketed in 1949. Welch created a product sold at movie theater concession stands and identified with a specific movie and radio series and displaying a name that sounded almost exactly like that property–yet different enough that it avoided any fees for licensing and merchandising. Junior Mints quickly became a popular candy, and one product in the line is the three oz. box marketed as the "Theater Size Junior Mints Concession Candy".

If you want to make something close to Junior Mints in taste, I suggest these Peppermint Patties by my friend Pattie Tierney. They're not small, but they're wonderful.

And, here's a recipe that includes actual Junior Mints:

Chocolate Crust:
Combine 2 cups crushed chocolate wafers (I whirl them in the blender) with 6 tablespoons melted butter.
Press into bottom and up sides of pan.
Posted by Janet Rudolph at 11:16 AM