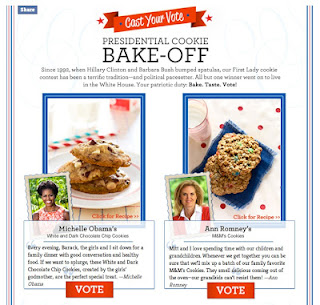 Last month I reported that Michelle Obama was declared the winner of the Family Circle Presidential Cookie Bake-Off. Her white and dark chocolate-chip cookies defeated the M&M cookies submitted by Republican rival Ann Romney. However, with the election looming, I thought you might want to do your own Bake Off and Voting this weekend. Below you'll find both recipes. Let me know what you decide.

Here are the official statistics: Obama won with 51.5 percent of the nearly 10,000 votes submitted, compared to the 48.5 percent of the votes garnered by Romney.  Of the dozens of polls that forecast the next presidential election, this one is the sweetest: The bake-off has gone on to accurately predict the general election outcome all but once since it began.

The only time the cookie test failed to accurately predict who would next claim the White House was in 2008, when Obama’s lemon zest shortbread cookie recipe lost to Cindy McCain’s oatmeal butterscotch cookie recipe. That win didn’t come without controversy — McCain was accused of copying the recipe from a Hershey’s website.

For this year’s bake-off, Obama submitted a “splurge” recipe created by the godmother of her daughters. Romney, a baking enthusiast, submitted a recipe for M&M cookies she claims her grandkids can’t resist.

From Michelle Obama: Every evening, Barack, the girls and I sit down for a family dinner with good conversation and healthy food. If we want to splurge, these White and Dark Chocolate Chip Cookies, created by the girls’ godmother, is the perfect special treat. 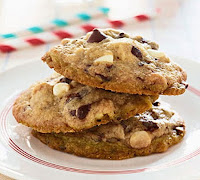 1. Heat oven to 375°.
2. Whisk together flour, baking soda and salt in a small bowl. In a large bowl with an electric mixer, cream butter, vegetable shortening, granulated sugar, brown sugar and vanilla extract.
3. Add eggs, 1 at a time, beating well after each addition.
4. On low speed, beat in flour mixture. By hand, stir in white and milk chocolate chips, mint chips and walnuts.
5. Drop rounded tablespoons of dough onto un-greased baking sheets.
6. Bake at 375° for 10 to 12 minutes or until golden brown. Cool on baking sheets for 5 minutes; remove to wire racks to cool completely.

1. Heat oven to 325 degrees F. In a large bowl, cream sugars, butter, peanut butter and corn syrup on high speed until well combined. Beat in eggs 1 at a time. Beat in vanilla extract.
2. In a separate bowl, mix together oats and baking soda. Stir into peanut butter mixture until combined. Mix in chocolate chips and M&M's.
3. Using a standard-size ice cream scoop, drop dough onto baking sheets (about 9 per sheet). Bake at 325 degrees F for 18 minutes or until lightly browned. Cool 2 minutes, then transfer cookies to a wire rack to cool completely.

AND DON'T FORGET TO VOTE IN TUESDAY'S PRESIDENTIAL ELECTION!!!
Posted by Janet Rudolph at 7:03 AM