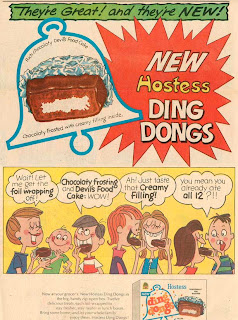 Unless you live in a vacuum, you must be aware that Hostess Brands announced Friday that it's liquidating the company. This marks the end of those lunchbox snacks--Twinkies, Ding Dongs, Ho Hos, Snow Balls.. and in terms of sandwiches, the ubiquitous Wonder Bread.

In a statement, Hostess said its bakery operations suspended all plants and is laying off most of its 18, 500 workers to focus on selling its assets. Among those assets: the recipes for its well-known brands, especially the spongy Twinkie, which holds a special place in America's culinary history. Over the years, it has been vilified by nutritionists, but it remains widely loved by snackers.

It even entered into U.S. legal history as the so-called "Twinkie defense," used by lawyers for former San Francisco city supervisor Dan White in his trial for the 1978 murder of Mayor George Moscone and city supervisor Harvey Milk. The legal team successfully argued that White's consumption of mass amounts of junk food, including Twinkies, was a symptom of the depression that led to his shooting of Moscone and Milk. White was found guilty of manslaughter, a lesser charge.

CEO and chairman Gregory F. Rayburn told CNBC that he was hopeful the company could sell its brands. He told TODAY that the move was not a negotiating ploy. "It's over. This is it," he said.

On Nov. 12, Hostess permanently closed three plants because of the strike. Two days later, the company announced that it would be forced to liquidate if enough workers did not return to restore normal operations by 5 p.m. ET Thursday. "We deeply regret the necessity of today's decision, but we do not have the financial resources to weather an extended nationwide strike," said Rayburn.
The BCTGM was not immediately available to comment. But Reuters reported that Union President Frank Hurt  blamed the company, saying it was kowtowing to Wall Street investors who have wanted to break up Hostess. Workers were still staffing picket lines early Friday.

A quick search of eBay showed people offering boxes of Twinkies for a range of prices -- from $5.00 a box to as much as $500.

So because this is a Chocolate Blog, I thought I'd focus on Ding Dongs. Here are four Ding Dong Recipes you can make at home. The difference? Shelf Life. An average Hostess brand Ding Dong has a shelf life of 9 years. These Home Made  treats? 3-4 days in the refrigerator.

Don't forget to scroll down and watch a classic Ding Dong Ad.

Posted by Janet Rudolph at 7:49 AM