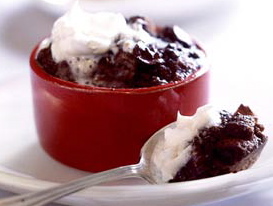 I've always cut out recipes from newspapers and magazines, stuffing them into books or drawers or just about everywhere. Organization on the recipe front was not always my forte, unless it was a tried and true recipe, but even then it sometimes disappeared, only to surface well pass the holiday I wanted it for. That's why I'm so happy to see some of my favorite recipes on the Internet.

This recipe (and photo) is from Cooking Light (2003), a hardcopy magazine I used to subscribe to. I found the recipe for Chocolate Chunk Bread Pudding again when it appeared in an ad on Facebook. I saw Chocolate, and I clicked! This recipe for Chocolate Chunk Bread Pudding is so easy, and so delicious. I'm a big fan of Hawaiian bread, and I practically live on it in when I'm in Hawaii. It's a sweet soft bread, not exactly the healthy grain bread I usually eat, but it's perfect in this recipe. You can find Hawaiian bread in the bakery section in most grocery stores.

In this recipe, chop the chocolate coarsely for good texture. You'll be biting into chocolate chunks which really adds to this unique bread pudding experience. The recipe, as I mentioned, is from Cooking Light, but if you don't want to "cook light" you can use real cream or whole milk instead of the 2%, and you can top it off with real whipping cream. I do.

Preparation
Preheat oven to 350°.
Arrange bread cubes in a single layer on a baking sheet. Bake at 350° for 5 minutes or until toasted. Remove bread from oven; decrease oven temperature to 325°.
Combine milk and next 5 ingredients (milk through egg) in a medium bowl, stirring well with a whisk. Add bread, tossing gently to coat. Cover and chill 30 minutes or up to 4 hours.
Divide half of bread mixture evenly between 2 (6-ounce) ramekins or custard cups coated with cooking spray; sprinkle evenly with half of chocolate. Divide remaining bread mixture between ramekins; top with remaining chocolate.

Place ramekins in an 8-inch square baking pan; add hot water to pan to a depth of 1 inch. Bake at 325° for 35 minutes or until set. Serve each pudding warm with 1 tablespoon whipped topping (or whipped cream).

Photo: Cooking Light
Posted by Janet Rudolph at 7:45 AM

This definitely has potential to be one of my comfort foods. And I love the hint of Kahlua in it!

Are there any good substitutes for Hawaiian bread? Thanks!

There really aren't any good substitutes for Hawaiian bread since it's a sweet soft bread, but check with your bakery.Sugar content is very high. Of course, you can always make a 'regular' chocolate bread pudding.

Lauren at Keep It Sweet said...

I love chocolate bread pudding, now you have me craving it!