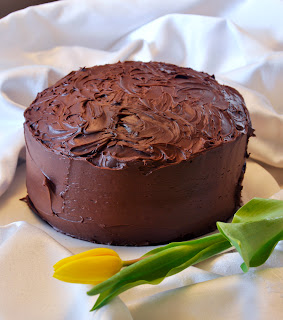 Yesterday was my birthday, and I know that Bobbi Mumm baked this especially for me. She sent this post and the photo on my birthday, so I know I'm right! Sadly, it was virtual since she lives in Saskatoon. I've been longing for this recipe since she first mentioned it on Facebook, so I'm so glad to welcome Bobbi Mumm as a guest blogger. Bobbi is a "mystery/chocolate cross-over" social media friend. That's a mouthful, and so is this chocolate cake!

Bobbi Mumm is a mystery and thriller writer in Saskatoon, Canada where she works half-time as an event planner at the University of Saskatchewan. Married to a nuclear physicist, she has four children, two of whom are college-age. The twins remain at home. Bobbi practices Karate, as do her kids.

A year ago, Bobbi completed her first novel, Cream with Your Coffin. This past year, she signed with a U.S. literary agent and is seeking a publishing home for the novel. Bobbi was thrilled this week to learn that Cream with Your Coffin is now a quarter-finalist in the Amazon Breakthrough Novel Award. An excerpt can be read here
http://tinyurl.com/amazoncreamcoffin   Almost finished her second novel, thriller De Rigueur Mortis, Bobbi has fallen in love, all over again, with the mystery that is Paris.

Thanks to Janet Rudolph for her tireless championing of mysteries and chocolate. I happen to know that she knows a whole lot about corporate team-building and event planning, too.

In Cream with Your Coffin, American event planner and mother of twins, Lucy Beam, is determined that, by fair means or foul, she’s going to carve out a new life in bucolic Saskatoon, Canada. But juggling social climbing with the parenting of twins—on top of being a Yank oddity—in this, oh-so-Canadian university town is a lot to handle and outspoken Lucy Beam’s fresh start is doomed from the get-go. Pickled neighbours and philandering vets drowned in vats of milk are only the beginning of her troubles.

In spite of her trials, Lucy spends time in her kitchen, cooking for her family and friends. There are five of Lucy’s recipes in Cream with Your Coffin. The most important recipe—the one that helps Lucy uncover the identity of the murderer—happens to be chocolate cake.

This is not any old chocolate cake recipe but one that has been handed down in my family for generations. You’ll see in its simple ingredients how it would have been a standby for the early homestead wives on the prairies.

This photograph was taken by my friend, Eve Kotyk, photographer, writer, and artist extraordinaire. http://tagonist.net Eve and I spent a lovely afternoon photographing the cake and then eating it with our mystery writer friend, Larry. I hope you enjoy it, too.

Line bottoms of round pans with waxed paper or butter and flour to prevent sticking. Add vinegar to milk to start milk souring. Cream sugar and eggs until fluffy. In a separate bowl mix dry ingredients. Mix everything together and beat two minutes with hand electric mixer or 1 minute with a stand mixer.

Bake at 350˚F until toothpick inserted in centre comes out clean, around 40 minutes for two round layer cake pans, around 20 minutes for cupcakes.

In layer cake use raspberry jam as filling. Makes two 8 inch rounds or 24 cupcakes.
Posted by Janet Rudolph at 8:15 AM

Get the best chocolate from around the globe delivered straight to your doorstep! $10 for $20 of fine chocolates at Chocolate.com.

oh my - this looks scrumpdillyicious.

Unlike Anonymous, I don't have a thing to deliver to your doorstep except myself so that I can share in this cake! Thanks to both of you.

Bobbi - I'm anxious to read some of your work, so I'm off to read the excerpt at Amazon.

Congratulations on being a finalist in the Amazon Breakthrough Novel Award contest - Good Luck!!!!

I've been fortunate to sample both the cake and Bobbi's mystery Cream with Your Coffin. Both are delicious! Please, ma'am, could I have some more?

The cake was a joy to photograph.

Janet - Thanks for hosting Bobbi.


Bobbit - Oh, yum, yum, yum!!!!! Thank goodness it's a virtual cake you're showing there or I'd gain a ton. That recipe looks incredible! Thanks for sharing :-)

What a great photo, Eve! Thanks

Janet, thanks so much for inviting me to Dying for Chocolate. I love your blog and was so happy to contribute. And yes, Eve Kotyk is one of those people who takes your breath away with everything she does.

The cake was every bit as good as it looks. And Eve and Bobbi's company made the eating even more enjoyable.
Larry Gasper

Margot, thanks for stopping by. I firmly believe that you are a person who could eat a whole chocolate cake with no ill effects. No, wait! That your dog that you told me about. ;-) Regardless, you definitely are a high-metabolism woman!

Eve, you're a darling. And you can have more anytime. You need some fattening up. :-)

Kaye, thank you! I'll get a cake in the oven. Should be ready by the time you get here.

Larry, thanks so much! The three of us are living proof that the cake isn't poisoned. :-)

I will have to buy Bobbi's book and read it while enjoying a slice - ?? come on who could eat just one slice of that scrumptious looking cake.

Thank you, Anonymous! I have it on good authority that an hour of reading cancels out the caloric intake of a piece of chocolate cake. Well, I just made that gem up but it's only waiting for the clinical trials before it's fact. :-)

The cake looks so delicious it is good that it is only virtual calories. Congratulations on your novel Cream With Your Coffee getting to the quarter finals Bobbi! Anne Maria