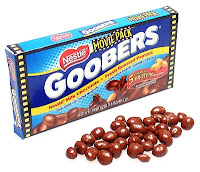 Today is National Chocolate Covered Nuts Day. I don't think I've ever met a chocolate covered nut I haven't liked, especially chocolate covered macadamia nuts. However, I got to thinking about the whole chocolate covered nut thing, and I realized that my love of chocolate covered nuts goes back to Goobers at the Movies! I always bought Goobers or Raisinets from the concession stand. My favorites. Goobers, though, were the best: fresh roasted peanuts covered in milk chocolate. Goobers are still made, but I miss the original box, the smell of the box, as much as the product. I just love the crunch of these small covered peanuts. The candy is made of just peanuts and chocolate. Nothing else.

Goobers were introduced in the United States in 1925 by the Blumenthal Chocolate Company. Nestlé acquired the brand in 1984. A large number of other brands exist, but Goobers are the original, at least for me. Peanut M&M's, came much later, and when they were introduced, I liked them, too, but not at the movies. I was a traditionalist. Peanut M&M's are nothing like Goobers. Peanut M&M's have larger peanuts, and the hardy candy shell covers the chocolate and the peanut. Goobers are inconsistent in size which I consider part of their charm and enjoyment. Often you'll just get chocolate without the nut. Occasionally you'll even get a raisinet. Whether or not that's a quality control issue, I don't care. It's always a surprise and a good one.

I'd like to say I've moved on from Goobers, but I really haven't. Oh yes, I love dark chocolate more than milk, and, especially in chocolate covered nuts. Also, the quality of the chocolate as well as the freshness of the nut is very important. As a Judge at this year's San Francisco International Chocolate Salon, I'll be taking all this into consideration when I judge the toffees and chocolate covered nut truffles, but I'll always have a place in my heart for Goobers.
Posted by Janet Rudolph at 1:54 PM

I think I might like the off-brand called Fisher better, but they're very hard to find. (But sometimes turn up in the vending machine at work.)

Cybele, I'll check them out. I think it's just about nostalgia..