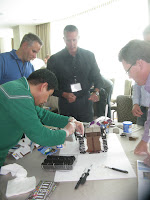 TeamBuilding Unlimited/Murder on the Menu does a Chocolate Challenge that's a lot of fun and pretty scrumptious. In this team challenge, each team must build a structure entirely of chocolate or chocolate related products. I've seen great buildings, hospitals, palaces and castles from different teams at Genentech, Hitachi, and PDL BioPharma and other companies.

Taking this competition a step further and having nothing to do with us :-); the World Chocolate Masters competition invites Chocolatiers from all over the world to enter a similar competition.

The finalists of the World Chocolate Masters 2009 work within a limited time of 11 1/2 hours. Each of the contestants has to create a complete range of chocolate items:
- a chocolate showpiece to the theme of "Haute Couture"
- a moulded and a dipped praline
- a chocolate pastry
- a gastronomic chocolate dessert
- a decorated "Haute Couture" hat

It's the Hat that's the Building Part of the Competition. Talk about a Chocolate Challenge!

The objective of both the National Selections and World Finals is to "provide a high interest format to promote the best artisans around the globe and support the best chocolate practice."

Lionel Clement, the French born chocolatier and the head chocolatier for the Wynn Las Vegas Hotel, is the U.S. Candidate at the World Chocolate Masters competition. He topped four other pastry chefs at a daylong competitio 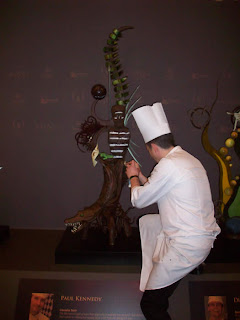 n in NY last November. In the structural part of the competition he used several layers of chocolate to produce a silhouette of a woman's face, with long hair and a fancy hat. That won him the chance to compete in the world competition.

Clement will face chocolatiers from 12 other European countries, China, Japan, Thailand, Russian, Canada and Mexico. The showdown will be in Paris. Clement has been practicing for four months with his flavors, four months designing and developing his show pieces and 4 months practicing, so he'll be able to get everything done within the 11 1/2 hours at the biennial culinary competition that starts October 14. The judges will judge competitors on a roughly 25-pound showpiece, as well as two identical layered cakes to serve eight people, a gastronomic chocolate dessert, two different pralines and the decorated haute couture chocolate hat.

"It has to be unbelievable, and at the same time you've got to be able to make it because otherwise it's not going to work," said Clement. "It's not only how to make and build master showpieces, it's also about flavor."

The competition is serious even if its participants wield only sweets; a prize of euro 75,000 ($109,000) is on the line including a euro 20,000 package (roughly $29,000) for the winner. The competition is organized by Barry Callebaut, the Switzerland-based cocoa and chocolate manufacture. The large showpiece has to be made almost entirely of chocolate or cocoa-derived products--parts must hold together with cocoa butter or melted chocolate.

Another amazing part of the competition is that each competitor works alone in hauling and assembling their piece and is also judged on how clean their workspace is 45 minutes after they're done. Clement said, "During the whole competition, it's only you and yourself — that's it."

At TeamBuilding Unlimited, nothing is singular. We encourage our teams to work together to build their showpieces. Everything we do at TeamBuilding Unlimited is customized to include the theme of the meeting, goals and objectives, jargon and buzzwords. In the Chocolate Challenge, we supply the chocolate materials and usually give you about 1-2 hours to complete the project. We have prizes, too, but not monetary! After all, the goal is to work together as a team in a fun challenging team bonding way!

To read more about the World Chocolate Masters, go Here.
The Participants
The Jury

To read more about the Chocolate Challenge at TeamBuilding Unlimited, go here.
Posted by Janet Rudolph at 2:57 PM