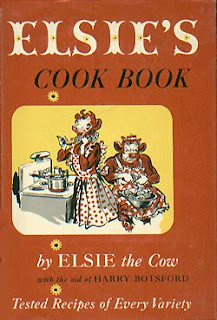 Today is National Cow Day, and my favorite cow is Borden's Elsie!

History of Elsie the Cow: In the 1930s, the dairy industry saw publicized price wars between farmers and dairy processors that caused larger dairies to be portrayed unfavorably. The cartoon Elsie was created by Borden’s advertising agency in 1936 to help make the brand more friendly and approachable to the public. The company first started advertising in medical journals, which featured a variety of cartoon cows with several different names, including Mrs. Blossom, Bessie, Clara and Elsie. A typical ad showed a cow and calf talking in a milk barn.

In the 1930s, milk was not the drink we know today. Much that was sold in the U.S. during the early part of the century was disease-laden. In 1907, the Department of Agriculture revealed that dairy cows frequently carried tuberculosis and that unsanitary conditions on farms meant other illnesses were carried in the milk supply as well. Most milk was shipped to stores without any form of processing.

The Borden Company was in the forefront of change. They had purchased a dairy in New Jersey that was among the first to install equipment for pasteurization.  However, the world changed slowly when it came to perceiving that “processed” (pasteurized) milk was better than regular cow’s milk.

Chicago was the first city to require pasteurizing of milk (1908) but the first state-level mandate did not occur until 1947 when Michigan passed such a law.

This meant that in 1930s dairy processors like Borden had their work cut out for them to convince the public that their milk was more worthy—and safer—than the dairy cow on a family farm.

Borden ad man Stuart Peabody knew his first approach to selling Borden milk needed to be through the medical establishment. If doctors understood that pasteurized milk wouldn’t make people sick, they would start recommending it to their patients.

Peabody felt the ads needed to be light in tone.  His first ads were in the form of Letters to Mama: “Dear Mama, I’m so excited I can hardly chew! We girls are sending our milk to Borden’s now. Love Elsie.” These ads were accompanied by artist Walter Early’s illustration of a perky, friendly cow. (The Advertising Age Encyclopedia of Advertising credits Walter Early; the Borden site attributes David Reid with having created the image of Elsie.

As early illustrations show, Elsie had a kindly face, huge brown eyes, and wore a chain of daisies around her neck. She generally wore an apron, and whatever she was doing, she had her calves around her. Husband Elmer, later the face of Elmer’s Glue, took orders from her, repairing things around the house.

In 1938, Peabody expanded Elsie ads into some consumer publications, and he began buying radio time for her as well.  Elsie took off quickly. A survey done in the 1940s found that 98 percent of the American public recognized the Borden cow.

So in honor of National Cow Day, here's an August 8, 1941 Retro ad and recipe from Borden's Eagle Brand for Magic Chocolate Ice Cream. I love Elsie the Cow, and I'm definitely take her advice on bringing "homemade ice cream to the social." Luckily, I have an automatic refrigerator! Gotta love these 'story' ads. "If it's Borden's, it's got to be good." 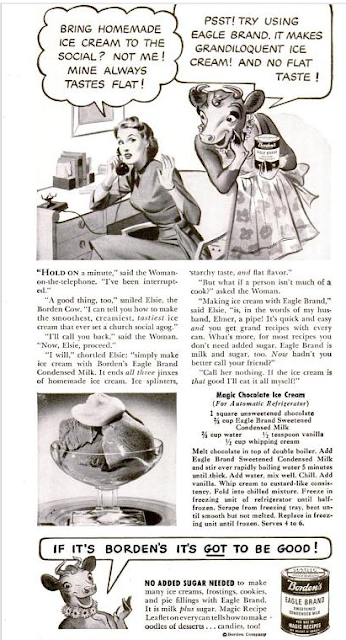 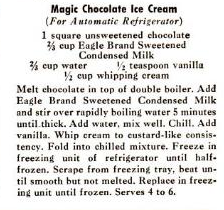 Posted by Janet Rudolph at 8:36 AM