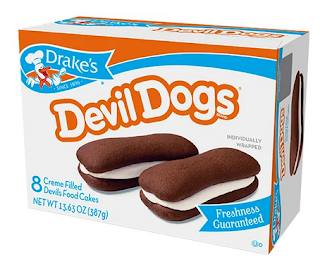 Today is National Devil Dog Day! This food holiday has nothing to do with devils or dogs. A Devil Dog is kind of like a hot-dog shaped whoopie pie. It has a smooth fluffy filling between two devil's food cake fingers. The Devil Dog is produced by Drake's Bakeries, originally known as Drake's Cakes, and they've been making them from 1926. National Devil Dog Day was started by Sean Alexander Sobel, who as a child ate Devil Dogs with his grandfather, Howard Leslie Sobel, and wanted to share the history of the snack. In 2017, the same year Sobel created the day, Drake's introduced Fudge Dipped Devil Dogs. The holiday began being celebrated the following year.

The term "Devil Dogs" dates to 1917 or 1918—it is believed the name was coined by Germans to describe American soldiers during World War I and alluded to their tenacity. The term was picked up on the homefront: the German word for it, Teufel Hunden was used on Marines recruiting posters in 1918, and newspaper stories also mentioned the phrase that year. The name became firmly associated with the Marines at that time but began being used for the snack eight years later.

If you're not able to find Devil Dogs right now because you're Sheltered-in-Place and your market is out of them, why not make some home-made Devil Dogs. See the following recipe. Don't want to make the Devil's Food Cake from scratch? Use a Devil Food Cake mix, but be sure and follow the filling recipe. 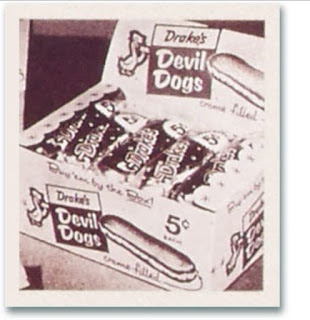 Filling:
Put butter in bowl of stand mixer fitted with the whisk attachment and cream until fluffy (about 4 minutes). Add confectioners sugar, marshmallow cream, and vanilla and continue mixing on low speed until combined, fluffy and smooth (about 2 minutes). But cream in pastry bag with large tip (or ziploc bag with corner cut in wide way). Pipe onto cakes as below.

Pipe marshmallow cream over surface to cover, chill 10 minutes so cream stiffens, then place second cake on top to make sandwich. Repeat with remaining cakes and filling. Cover and chill for at least 1 hour before serving. Will keep in refrigerator (covered) for up to 5 days. Can freeze for 2 months.

Makes a lot of Devil Dogs!

Want another recipe for Devil Dogs? Serious Eats has a more 'serious' recipe.. I haven't tried that one yet.
Posted by Janet Rudolph at 10:51 AM