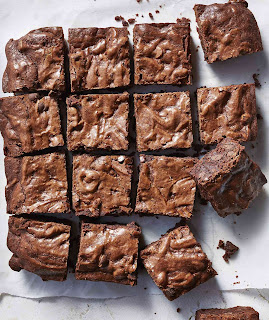 This is a repost from 2009, but I remember Aunt Sylvia's Brownies from the 1950s. They were so rich and delicious!
***
2009: I was rummaging through old recipes the other day looking for the Thanksgiving Corn Pudding Recipe (doesn't contain chocolate), and I came across an envelope labeled Recipes in my mother's handwriting. There were several hand-written recipes, some in my Mother's writing, some in mine (when I was younger when my penmanship was better), and some I wasn't sure about. However, in the envelope was the elusive recipe for my Aunt Sylvia's Brownies. I read through the recipe, and it just seems so simple, yet her brownies were always the BEST! Chewy, not cakey, and crunchy on the top. Yum.

My Aunt Sylvia, my Father's sister, lived about 100 miles from us, and we visited about once a month. I can still see her in her dress, high heels and apron pulling these brownies out of the oven in her state of the art 1950s kitchen in her mid-century modern ranch house -- a brand new custom-designed ranch home at the time. The family room and sun room had beautiful knotty pine panelling, the kitchen was green (not avocado but dark green) with a fancy wrought iron glass table top kitchen set. Maybe I'm confused on the details of that house on Green Street, but I can still remember the taste of those sensational brownies. They were a real treat!

Posted by Janet Rudolph at 6:57 AM

Oh, boy, do they sound good! Just the way I like them, chewing with a crisp top. You may look into the recipe using four squares. Baker's has changed the "squares" so one ounce isn't what it used to be. Fewer in a box now. Like a lot of other foods, smaller packaging.