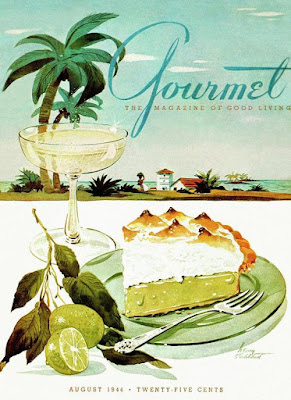 Key Lime Pie is one of my favorite pies. There seem to be several different Key Lime Pie Days (September 23, 26, and June 15). You pick... or have this easy delicious pie whenever you want. I'm going with September 26 for the purposes of this blog!

Several years ago during a trip to the Florida Keys, my sister and I tasted over 25 different key lime pies. We judged them on tartness, firmness, sweetness (too sweet is unacceptable), whipped cream vs. meringue, and crust. It was a hard job, but we had to do it.

FYI: Key Lime Pie is the official pie of the Florida Keys.

I've made different variations of key lime pies, and, as I always say, you can never have too many recipes. Variety is what it's all about. One ingredient that is essential is using real key limes.

I buy key limes at my market. Key Limes are definitely different from 'regular' limes. Key limes are smaller, about the size of a ping-pong ball. They are round, think-skinned, and contain very few seeds. They're juicier than other limes, too. Green key limes are actually immature fruits. They ripen to yellow as they mature. That being said, I buy them green, probably because that's they way they sell them at my market. Just an FYI: bottled Key Lime juice is sometimes used in Key Lime Pies. This juice is not always made from key limes. Find fresh key limes, if you can. It will make a huge difference.

Key limes are also known as Mexican limes and West Indies limes. Cultivated for thousands of years in the Indo-Malayan region, this variety made its way to North Africa and the Near East via Arabian traders, and then carried on to Palestine and Mediterranean Europe by the Crusaders. Columbus is credited with bringing the Key lime to Hispaniola (Haiti), where it was carried on by Spanish settlers to Florida. Key Limes are found in in South Florida, particularly the Florida Keys, hence the current common name of Key Lime. Due to hurricane-depleted soils, locals switched from pineapple commercial crops to limes in 1906, and business boomed until a hurricane once again reared and wiped out the lime groves, never to be restored. Sadly, even if they had been, they would be gone again after several other hurricanes. Most Key limes now come from Mexico.

Key Lime Pies are yellow, not green (unless you add food coloring--ugh!). And, some people top Key Lime Pie with Meringue.. some with whipped cream!

Crust
Mix together crumbs and sugar in bowl, add butter, and mix well. Press into bottom and up sides of  9-inch pie pan. Make it tight.
Bake 350 F for 8 minutes.
Allow to cool on a wire rack.

Filling
Beat egg yolks and grated Key Lime zest for about 5 minutes until fluffy.
Add sweetened condensed milk and beat for 4 more minutes.
Reduce speed and beat in lime juice until combined.
Pour into prepared chocolate graham cracker crust.
Bake at 350 for 15 minutes (until firm in center)
Remove from oven and cool on wire rack.
Cover and chill for 2 hours.
Top with Whipped Cream or Meringue (whichever you prefer)

Posted by Janet Rudolph at 8:28 AM