Tomorrow is National Chocolate Mint Day... the perfect food holiday to write about focusing on one of my all time favorite candies -- Junior Mints.

Junior Mints are a candy consisting of small rounds of mint filling (with a dimple on one side) inside a dark chocolate coating. They are currently produced by Tootsie Roll Industries. 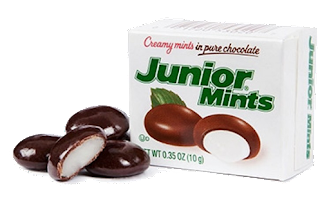 Chocolate Crust:
Combine 2 cups crushed chocolate wafers (I whirl them in the blender) with 6 Tbsp melted butter.
Press into bottom and up sides of pan.
Posted by Janet Rudolph at 12:08 PM