Today is National Blonde Brownies Day. Blond Brownies is a misnomer. Blondies are not Brownies! They get their flavor from brown sugar and not cocoa or chocolate, but they're wonderful for exactly what they are--a great butterscotch 'brownie.' Over the years, I've added macadamia nuts, white chocolate chips, butterscotch chips, chocolate chips, or a combination of these ingredients to the following basic recipe. The variety of additions is huge, and the basic batter is a delicious brown sugar concoction. Blondies are simple to make, and I highly recommend them. I use dark brown sugar because I think it adds more flavor. As in any recipe, the quality of the ingredients makes a difference in your final product. 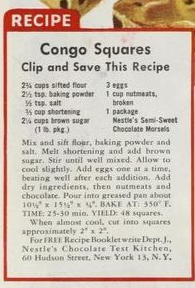 Posted by Janet Rudolph at 8:12 AM