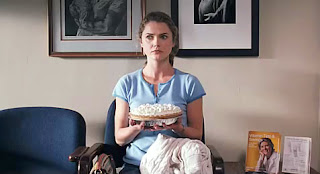 I recently re-watched Waitress, a smart and quirky foodie movie from 2007. Waitress was written and directed by the late Adrienne Shelly. Jenna, played by Keri Russell, is a woman trapped in a life she dreams of escaping. She plans to save money from her waitressing job to leave her controlling husband and change the course of her life. She's sharp and sassy and has a gift for making unusual pies whose recipes are inspired by the trials and circumstances of her life. Pies such as: I Don't Want Earl's Baby Pie, Baby Screamin' Its Head Off in the Middle of the Night & Ruinin' My Life Pie, I Can't Have No Affair Because It's Wrong & I Don't Want Earl to Kill Me Pie, Falling in Love Chocolate Mousse Pie, and Marshmallow Mermaid Pie.

So today I thought I'd post Jenna's recipe for Marshmallow Mermaid Pie. The recipe actually came with the DVD of the film, but you can find variations of the recipe on the Internet.

Posted by Janet Rudolph at 7:22 AM