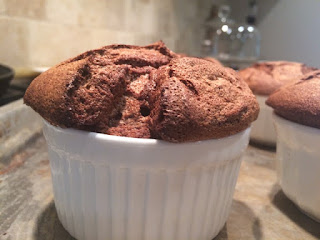 My chocolate and mystery worlds collide again! Today I welcome back mystery author Daryl Wood Gerber. Agatha Award-winning Daryl Wood Gerber writes the French Bistro Mysteries as well as the nationally bestselling Cookbook Nook Mysteries. As Avery Aames, she pens the popular Cheese Shop Mysteries. Daryl also writes stand-alone suspense, which include the titles DAY OF SECRETS and GIRL ON THE RUN. Fun tidbit: as an actress, Daryl appeared in “Murder, She Wrote.” She loves to cook, and she has a frisky Goldendoodle named Sparky who keeps her in line!

Hello, Janet’s fans. Thank you for letting me share a bit about my upcoming book as well as a delicious chocolate soufflé recipe. For those who don’t know me, I’m known for my culinary mysteries—currently, the French Bistro Mysteries. The first, A Deadly Éclair, came out in trade paperback in June. (It debuted in November 2017 in hardcover, e-book and audio). The second in the series, A Soufflé of Suspicion, will be on the shelves July 10.

Here’s a bit about A Soufflé of Suspicion:

The buoyant mood at Bistro Rousseau deflates when Chef Camille’s sister, Renee, turns up dead in the chef’s kitchen, and Mimi Rousseau must tease the real killer out of a mélange of menacing characters. 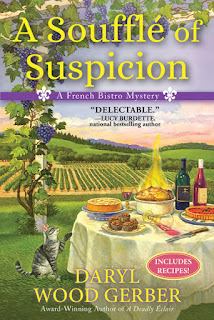 Crush Week in Nouvelle Vie is a madhouse—in a good way. Tourists pour into town for the pressing of the Napa Valley’s world-renowned grapes and all the town’s businesses get a nice lift, including Bistro Rousseau and Maison Rousseau. Mimi is raising the ante this year with a Sweet Treats Festival, a wonderland of croissants, cakes, tarts, and soufflés crafted with expert care by the area’s top talents. Chef Camille’s sister Renee is managing the festival with a cast-iron fist, upsetting everyone, including her sister, which is bad for Camille when Renee turns up dead in the chef’s kitchen. Mimi is still building her business, so her first course of action is to whip up answers and catch the unsavory perpetrator before Camille takes a dusting and gets burned.

Of course, when I write the recipes for my books (oh, yes, there are recipes included), I do a lot of research. Over the years, I’ve become quite adept at making spinach soufflé and cheese soufflé, but I hadn’t tried my hand at many dessert soufflés. Well, let me tell you, I had a blast cooking and taste testing for this novel. The orange soufflés were quick favorites with my young grandsons. Personally, I’m partial to the salted caramel and chocolate soufflés. There’s something about dessert that makes me smile. I hope this recipe will make you smile, too. Don’t be upset if the soufflé deflates quickly. That’s to be expected. No matter what, the flavor will still be great. Enjoy. 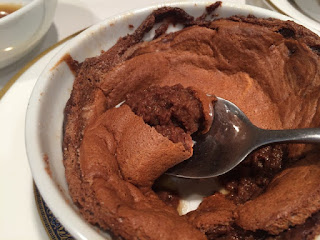 Directions
Gather and measure out all ingredients. Preheat oven to 425 degrees F. Set a rack at the lower level of the oven.

Place the chocolate and coffee in the small pan over the pot of simmering water. Cover and remove from heat, allowing the chocolate to melt while continuing with the recipe.

Measure the cornstarch into a 2-quart saucepan. Whisk in the milk to make a smooth cream. Continue whisking until all milk is added. Add the butter and stir over medium heat until boiling. Boil the mixture, stirring for 2 minutes. Remove from heat and beat for another minute to cool slightly.

Now, one by one, whisk the egg yolks into the hot milk sauce. Then add the melted chocolate mixture. Then mix in the vanilla. 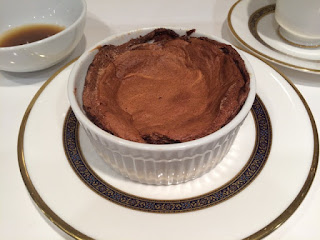 Gently fold the chocolate mixture into the egg whites. Pour the soufflé mixture into the prepared soufflé dishes and set on the rack in the lower level of the oven. Turn the temperature down to 375 degrees F.

Bake for 24-28 minutes WITHOUT opening the oven door. Soufflé is still creamy in the center when a skewer comes out slightly coated. It is fully done and will stand up well when the skewer comes out clean. Either way is fine and is merely a matter of preference. (I prefer mine almost, but not quite completely done.)

When you first take the soufflé out of the oven, it will be VERY tall. It will deflate quickly. Don’t take offense. Let cool 10-15 minutes.

If desired, serve with brandy sauce. 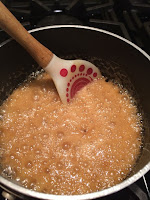 Combine the butter, brown sugar, granulated sugar, and cream in a medium, heavy-bottomed saucepan. Stir the mixture over low heat until the sugar dissolves, then increase the heat to medium and bring the sauce to a gentle boil. Stir often. Cook 5 more minutes. Remove the saucepan from the heat and stir in the brandy.

Serve immediately, or cool to room temperature, then cover and refrigerate until needed. To rewarm, microwave the uncovered sauce on low for about 1 minute.