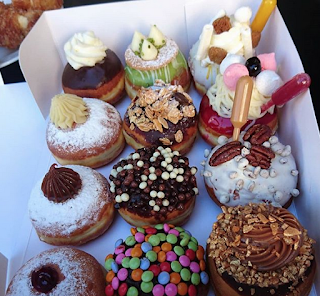 At Hanukkah in Jerusalem, you can find an assortment of donuts in all different flavors. Why the Donut for Hanukkah? Think oil. Hanukkah is a holiday that celebrates the miracle of the oil that was used to light the menorah. When the Maccabees returned to Jerusalem, they found a vessel of oil but it was only enough for one night. However, instead of lasting for one night, it lasted for eight.

Of the recipes to try, these are the author of “The Mohel From Mars: A Hanukkah Story,” Miri Ariel’s favorites:


***
Miri Ariel is the author of the #1 new release in Hanukkah books on Amazon, The Mohel from Mars.

It follows Motti, a mohel, who discovers that he has another calling in life. In a modern retelling of the Hanukkah story, Motti lives a double life, by day as a mohel and by night as a Maccabee fighting the Greek space monsters known as Seleucids.

Miri wanted to create an action packed story for Hanukkah that was both contemporary and fun. In a family of lawyers and doctors, Miri chose to be a writer and to follow her own path, just like Motti must choose to follow his in this unique and engaging Hanukkah story.
Posted by Janet Rudolph at 6:28 AM