Tuesday Tips: How to Make the Best Brownies 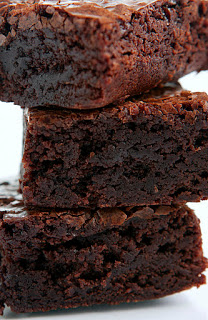 Brownies are just about my favorite chocolate dessert. They're pretty easy to make, and there's lots of versatility. The classic Brownie consists of butter, sugar, chocolate, eggs, and flour. Fudgy Brownies do not usually use baking powder, and melting the butter rather than creaming it will produce a denser, fudgier brownie. Cake-like brownies are, well, cakes! They have less butter and more flour, and usually some baking powder. And you usually cream the sugar with the butter rather than melting with the chocolate. Sometimes cake-like brownies use milk, too.

So what kind of brownies do you like? Fudgy or cake-like? Whatever you like best, be sure and choose the right recipe. Below I have a link to lots of different Brownie recipes. Read through them before you begin to do anything. Choose wisely.

Here are some more Tips for Making the very best Brownies!

Be sure and let the chocolate cool after you melt it. After you take it off the stove, put it aside to cool before you add the eggs and sugar. You don't want to scramble the eggs.

Don't overmix your batter. It can cause a thin crust on top. Also, if you want to improve the texture of the brownies, put the unbaked batter (in the prepared pan) in the refrigerator for a few hours before putting it in the oven.

Always use the right pan. That means really reading the recipe and not substituting a pan that's smaller or larger than called for. If you do, you need to adjust the cooking time for the recipe. Do you know how to do that? I almost always use a 8 x 8 inch pan. If you use a larger pan, you'll have thin dry brownies. If you use a smaller pan than called for, the brownies might be gooey in the center. I use a metal pan. I've found that glass pans cause the edges to overbake.

Be sure and grease the pan. I use butter, but cooking spray or shortening works, too. If you decide to use parchment paper (after greasing the pan) to make it easier to lift the brownies, be sure and have it hang over the sides, and also be sure to grease the parchment.

Don't overcook your brownies. There's nothing worse than dry brownies. If you're doing the toothpick test, be sure there are some crumbs on the toothpick, not totally clean as in "until a toothpick inserted comes out clean." No!! The brownies will continue to cook, so take them out a few minutes earlier. For fudgy brownies, remove the pan when the sides have shrunk slightly away from the edges. Center will be gooey, but the brownies will continue to cook while cooling.

Ah, and here's the final tip. Don't cut the brownies until they're cool. I know this may be  difficult, especially when your whole house smells like chocolate! The brownies will actually taste better if you wait. Believe me...

Posted by Janet Rudolph at 8:56 AM

Email ThisBlogThis!Share to TwitterShare to FacebookShare to Pinterest
Labels: brownies, How to Make the Best Brownies, Tuesday Tips