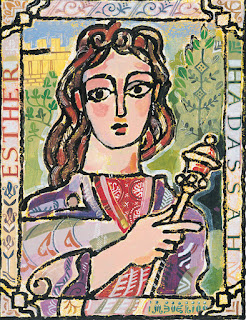 The Holiday of Purim falls this weekend (lunar calendar). The traditional food served during this Jewish holiday is Hamentaschen. They're made to resemble Hamen's (the villain of the story) hat! Traditionally, hamentaschen were filled with prune, apricot, or munn (poppyseed). But what's to say that Hamen's Hat couldn't be made of or filled with chocolate? I must mention that this holiday is about a Jewish woman (Queen Esther) who saves her people. How can you not love a holiday that honors a strong clever woman?

Short summary: The holiday of Purim appears in the Book of Esther. The story is read from the Megillah. So as not to give you the whole 'megillah' here, the story goes that Esther, a beautiful young Jewish woman living in Persia, and her cousin Mordecai, who raised her as a daughter, was taken to the house of Ahasuerus, King of Persia, to become part of Ahasuerus' harem. King Ahasuerus loved Esther and made Esther queen, but the king did not know that Esther was Jewish. The king’s aide, Haman, wanted to kill the Jews. Esther tells the king that Hamen is plotting to have her killed-- well he's plotting to have all the Jews killed. When she tells the King that she is Jewish, the king kills Haman instead and saves the Jews.

During Purim, everyone eats hamantaschen. They are supposed to be modeled after Haman’s three pointed hat. In Israel it's said they're shaped like Hamen's ears (oznei Haman), but I feel better about eating hats than ears. :-), but if you're so inclined here's a great video and recipe for Haman's Ears with Halva Spreads (one features Bittersweet Chocolate Sea Salt Halva spread) from Jamie Geller at Joy of Kosher!

Following are two great recipes for Chocolate Hamentaschen for Purim. You'll find them quite different, and I suggest you try both. Although the holiday starts this weekend, there's no reason that these great pastries (cookies) can't be made and consumed now (or at another time)!

Dough: Be sure and chill your dough. If you're not quick about it, put the dough back in the fridge for a short time. Be sure and refrigerate the dough before rolling it out. Roll out dough between pieces of parchment or wax paper rather than adding more flour, so the final product isn't too dense and doughy.


This second recipe features a really dark chocolate pastry,  and these hamentaschen are filled with jam. This recipe is adapted from Emily at Voila! Adventures in the Kitchen with Emily. Another great taste treat is to fill these with peanut butter.

III. And, here's a recipe to a third recipe for Chocolate Chip Cookie Stuffed Chocolate Hamentaschen from With love and cupcakes.
Posted by Janet Rudolph at 8:07 AM