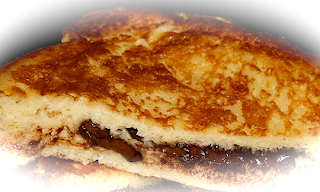 Today is National French Toast Day. I posted a great recipe several years ago for Stuffed Challah Nutella French Toast, and if you have Nutella on hand, today's the day to make that recipe!

I also posted a recipe  in 2009 on National French Toast Day for Chocolate French Toast. That recipe calls for Cocoa as the Chocolate, and the cocoa is actually in the batter. It's lovely, and I usually make it with cinnamon bread, so there's the extra taste of cinnamon.

Today I have a totally different recipe for a Stuffed Chocolate French Toast that is more like a French Toast Chocolate Croissant! Using Challah or Brioche is great because they're egg breads, so they're richer. Adds to the flavor!

Preparation:
Whisk together eggs, milk, cream, vanilla, sugar, and salt in large shallow dish until mixture is combined.
Melt 1-1/2 tablespoons butter in large heavy nonstick skillet or griddle over moderately high heat.
Dip 2 bread slices in egg mixture until lightly soaked, turning once.
Transfer to skillet and reduce heat to moderate.
Sprinkle each slice with a fourth of chocolate and top with 2 more slices of egg-dipped bread.
Press sandwiches gently with a spatula to help slices stick together.
Cook, turning sandwiches over once, until chocolate is melted and French toast is browned and cooked through, about 10 minutes total.
Transfer to a plate and keep warm, covered.
Wipe out skillet and make 2 more sandwiches in same manner.
Cut French toast in half and sprinkle with powdered sugar or a bit more chopped chocolate.
Posted by Janet Rudolph at 8:35 AM