Cinnamon Chocolate Truffles: All about Cinnamon 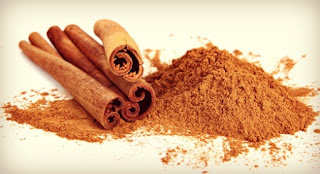 Over the years I've posted some many recipes containing Cinnamon. However, I don't think I've ever discussed the different types of cinnamon. The cinnamon you choose will affect the flavor of your final product. So let's talk cinnamon. It's versatile in that it's sweet and spicy at the same time. And, of course, cinnamon pairs perfectly with chocolate.

Saigon Cinnamon is bright and spicy and adds a kick of flavor. I really like this cinnamon in the following truffle recipes. It will really complement and heighten the chocolate. This cinnamon comes from an evergreen tree found in Southeast Asia.

More commonly produced, Ceylon Cinnamon is  sweeter and milder in taste and lighter in color. Ceylon Cinnamon is delicate and subtly floral and is good to pairing with other spices. Ceylon Cinnamon is grown in Sri Lanka, Madagascar, Brazil, India, and the Caribbean. FYI: this cinnamon does not contain coumarin or just trace amounts (but that's another subject).

Cinnamon Sticks: If you're making the first recipe, be sure and use premium cinnamon sticks such as Ceylon Cinnamon Sticks. You can find them online or at a high end market. Since this cinnamon is flavoring your cream in the recipe, you'll want the best. Cinnamon sticks are the peeled, dried, and rolled bark of a cinnamon tree.

So if the cinnamon in your pantry is old or you just want to try something new, try one of the above. Buy it fresh from a reputable purveyor. 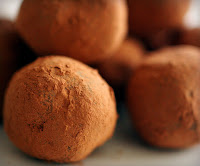 Directions
Place chopped chocolate in large bowl and set aside.
Combine cinnamon sticks with cream in medium small saucepan over medium heat and bring cream to simmer. Once simmering, remove pan from heat and cover with lid. Let sit for 30 minutes to absorb flavors.
After 30 minutes, remove lid, return pan to heat and bring cream to simmer once more. Pour hot cream through fine mesh strainer into chocolate bowl, straining out cinnamon sticks.
Let hot cream and chocolate stand for one minute to soften chocolate, then whisk mixture gently until chocolate melts and mixture is entirely smooth. Add room temperature butter and salt, and whisk in. This is the ganache.
Cover ganache with plastic wrap, placing plastic wrap directly on top of ganache so that it is not exposed to air. Refrigerate ganache until firm enough to scoop but not solid, about 45-60 minutes.
Mix cocoa powder and cinnamon together in shallow bowl. Dust hands with cocoa powder. Scoop teaspoonfuls of ganache and roll  between hands to form small balls, adding more cocoa powder as necessary to keep them from sticking to palms.
Put truffles on a baking sheet covered with parchment or waxed paper.
Store Cinnamon Truffles in an airtight container for up to a week. Best served at room temperature.

Directions
Line cookie sheet with parchment paper.
In heavy 2-quart saucepan, melt chocolate and butter over low heat, stirring constantly. Once smooth, remove from heat. Stir in whipping cream, vanilla, and 1/2 tsp cinnamon.
Refrigerate mixture for about an hour, stirring every 15 minutes or so, until firm enough to roll into balls.
Shape into balls - if mixture is too sticky, refrigerate until firm enough to shape.
Refrigerate balls again for 1 hour or until firm.
In small bowl, combine remaining 1 Tbsp of cinnamon, cocoa, and powdered sugar. Roll truffles in cocoa and cinnamon mixture.
Store in airtight container in refrigerator up to 1 week. Remove truffles from refrigerator about 30 minutes before serving.

Posted by Janet Rudolph at 9:31 AM

First time on your blog, came via another one (can't remember which, sorry). Wow a chocolate blog, how neat. Will be trying these truffles for sure! Thanks Janet.

Thanks, Sami, for stopping by...