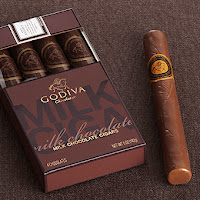 I posted this on my other blog Mystery Fanfare yesterday, but I had to post it here as well: My worlds of chocolate and mystery collide again.

A Nazi plot to kill Sir Winston Churchill with a bar of exploding chocolate during the Second World War has been revealed in historic papers.

Giving a new meaning to the dessert name “death by chocolate”, Adolf Hitler’s bomb makers coated explosive devices with a thin layer of rich dark chocolate, then packaged it in expensive-looking black and gold paper.

The Germans apparently planned to use secret agents working in Britain to discreetly place the bars - branded as Peters Chocolate - among other luxury items taken into the dining room used by the War Cabinet during the conflict.
The lethal slabs of confection were packed with enough explosives to kill anyone within several metres.

The plot was foiled by British spies who discovered the chocolate was being made and tipped off one of MI5’s most senior intelligence chiefs, Lord Victor Rothschild, before the wartime prime minister’s life could be endangered.

So this is what happens when the two collide!!! I "likey."

Oh well I guess it would have been a good way to go!