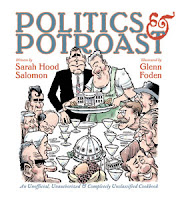 President's Weekend, and I 'll definitely have a few more recipes, but today I wanted to mention this fun cookbook I came across recently. Some of you know that I collect mystery, literary, art and movie tie-in cookbooks. Politics & Pot Roast is 'a flavorful look at the Presidency', compiled by Sarah Hood Salomon. It features original or favorite recipes of U.S. Presidents and First Ladies. This bi-partisan cookbook contains tested and tasty recipes, including James Monroe's Minted Fruit Cordial, L.B.J.'s Pedernales River Chili, and Mamie Eisenhower's Million Dollar Fudge. Each recipe is accompanied by unusual presidential facts and amusing anecdotes. So make some of Mamie's Million Dollar Fudge this weekend!

Directions:
In a large bowl, combine both types of chocolate, marshmallow cream and salt. Put milk and sugar in a large pot. Bring to a boil, stirring constantly. Cook, stirring mixture over the chocolate. Add nuts and butter and beat until the chocolate is melted and the fudge is creamy. Pour into buttered 9"x9" pan and let cool at room temperature for a few hours before cutting into squares. Store in an airtight container. Makes about 5 pounds of fudge.

Historic Note:
President Eisenhower was so fond of this desert that he named it "Mamie's Million Dollar Fudge."
Posted by Janet Rudolph at 7:53 AM

I love cookbooks and this one sounds very interesting. I have never made fudge before, but this doesn't sounds too difficult.

This sounds so good I will stop on over and have some Million Dollar Fudge with a nice tall cold glass of milk, non fat of course!

Oh man, this is a great recipe and adding the pecans instead of walnuts tastes way better! But really it's up to the person, I've heard of people using peanuts, yuk! Some times I put a little less sugar so they're not as rich and then I slice it up and let it sit in a glass dome for a few days to let it harden just a little bit, when it's fresh made it's way too soft for me. But once again, perfect recipe!